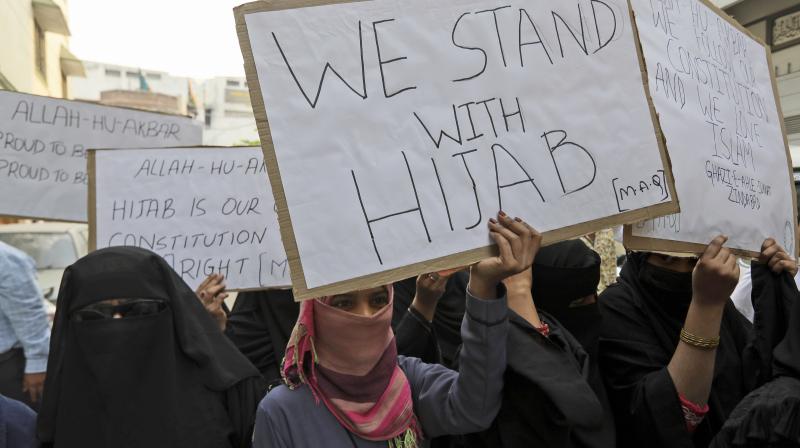 Muslim woman holds placards during a protest against banning Muslim girls wearing hijab from attending classes at some schools in Karnataka, in Hyderabad (AP Photo/Mahesh Kumar A.)

New Delhi: India on Saturday rejected criticism by some countries over the simmering dress code row in certain educational institutions in Karnataka and said that "motivated comments" on the country's internal issues are not welcomed.

External Affairs Ministry spokesperson Arindam Bagchi said that those who know India well would have a proper appreciation of the realities.

"A matter regarding dress code in some educational institutions in the State of Karnataka is under judicial examination by the High Court of Karnataka," he said.

"Our constitutional framework and mechanisms, as well as our democratic ethos and polity, are the context in which issues are considered and resolved. Those who know India well would have a proper appreciation of these realities. Motivated comments on our internal issues are not welcome," he said.

Bagchi's response came when asked by the media about comments by some countries on dress code in some educational institutions in Karnataka.

"Religious freedom includes the ability to choose one's religious attire. The Indian state of Karnataka should not determine permissibility of religious clothing. Hijab bans in schools violate religious freedom and stigmatize and marginalize women and girls," he tweeted.

Pakistan on Wednesday summoned India's Charge d'Affaires in Islamabad and conveyed its concern on the restrictions on Muslim girl students from wearing hijab or wearing headscarves in Karnataka.

The Pakistan Foreign Office said that the Indian diplomat was conveyed its deep concern over what it alleged as religious intolerance and discrimination against Muslims in India.

The Hijab row started a few weeks back after a few girl students in hijabs were denied entry into a government pre-university college in Udupi. Following the incident, protests erupted against the hijab ban in various parts of the state.

The Karnataka High Court has restrained all students from wearing any sort of religious dress within the classroom in the state, regardless of their religion or faith, until further orders on pleas challenging the ban in educational institutions with a dress code.