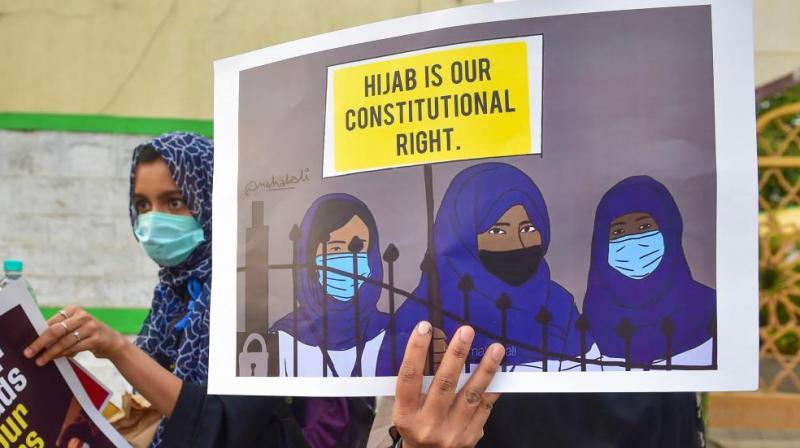 Muslim women hold placards while wearing burqa and hijab to stage a demonstration in support of female Muslim students, in Bengaluru. (Photo: PTI)

New Delhi: In a candid message, the Supreme Court on Friday said that it is watching the situation in Karnataka in the wake of the hijab ban, including the proceedings in the high court, and would step in at an appropriate time to protect the constitutional rights of the affected people. The Supreme Court, however, declined to give urgent listing for hearing a Special Leave Petition against Karnataka high court’s direction regarding the hijab petitions.

“We will definitely protect the constitutional rights of everybody, definitely we will interfere, we will take up the matter at an appropriate time,” Chief Justice N.V. Ramana heading a bench also comprising Justice A.S. Bopanna and Justice Hima Kohli told senior lawyer Devadatt Kamat who sought top court’s intervention in the high court order asking affected students not to insist on wearing religious clothes which are not conducive.

The Karnataka high court on Friday issued an interim order restraining students from wearing hijab and saffron shawls in classrooms.

In the course of the hearing on a batch of petitions challenging the hijab ban before the Karnataka high court on Thursday, Chief Justice Ritu Raj Awasthi said, “We are ready to decide the issue at the earliest. We feel that peace and tranquillity should be restored. Till the decision, you should not insist on wearing these religious clothes which are not conducive.”

Making a mentioning for an urgent listing of the petition challenging the interim order, preferably on Monday (February 14), senior lawyer Kamat told the Supreme Court that the interim order is not limited to Muslims as it would not impact Muslims alone but also other religions minorities like Sikhs, who wear turban. He said the interim order denudes minorities rights guaranteed under Article 25 of the constitution guaranteeing freedom of conscience and free profession, practice and propagation of religion.

However, CJI Ramana asked Mr Kamat not to enlarge the issue at the national level by bringing it to the Supreme Court.

“Don’t spread these issues to a larger level by bringing it to the Supreme Court. We are watching. We also know what is happening in the state and in the high court. We will definitely protect the constitutional rights of affected people. Definitely we will interfere. We will take up the matter at an appropriate time”, CJI Ramana said.

As solicitor general Tushar Mehta, appearing for Karnataka's BJP government, said that the high court order has not come and there should not be any attempt to politicise the issue, CJI Ramana asked him to let Mr Kamat have his say.

The petition challenging the interim order of the Karnataka high court, asking students not to insist on wearing religious clothes, says that the interim order creates a distinction between Muslim and non-Muslim female students and directly hits at secularism, which is part of the basic structure of the Constitution.

“The right to wear hijab falls under right to expression under Article 19(1)(a), right to privacy and freedom of conscience under Article 25. The same cannot be infringed upon without a valid law,” the petition has contended.