India   All India  12 Feb 2022  As hijab row spreads, senior classes to remain shut in Karnataka till Feb 16
India, All India

As hijab row spreads, senior classes to remain shut in Karnataka till Feb 16

BRIMS students, however, were reportedly allowed to take the examination after the intervention of student groups 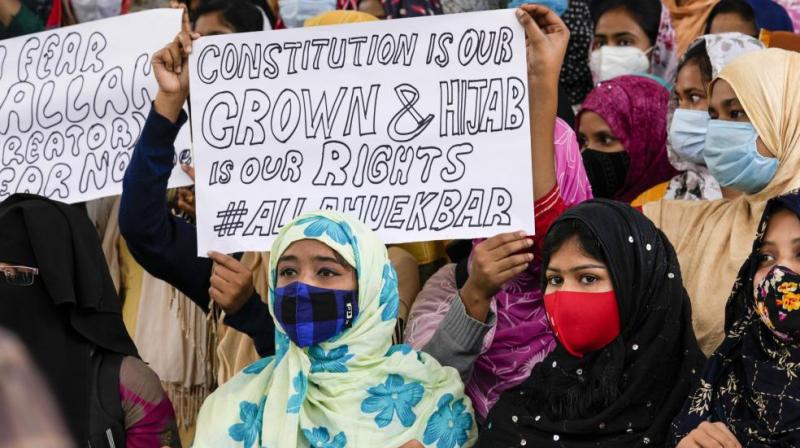 Students participate in a procession to protest against barring Muslim girls wearing hijab from attending classes at some schools in Karnataka, in Kolkata, Feb. 9, 2022. (AP /Bikas Das)

New Delhi: The Karnataka government has postponed the resumption of classes for Standards 11 and 12 and colleges in the state till Wednesday after a fresh row erupted in Bidar after the Institute of Medical Sciences (BRIMS), a government medical college, on Thursday refused to allow hijab-wearing students to sit for their BSc nursing examination.

The incident took place on Thursday even as the Karnataka High Court was hearing the matter and had asked all sides to maintain restraint till its final order.

BRIMS students, however, were reportedly allowed to take the examination after the intervention of student groups. The BRIMS administration denied the allegations. According to Chandrakant Chillargi, director of BRIMS, the students were stopped for a few minutes outside the hall to enable examiners to check their identity cards and to rule out proxy candidates.

He added that the staff on examination duty had only asked the girls to produce their ID cards at the entrance, as it was difficult to recognise students if their faces were covered.

Referring to a video clip that was shared on social media, he said the examination hall in-charge was asking outsiders who had accompanied the girls to leave the campus, which does not violate any rule.

Amid this row, Kerala Governor Arif Mohammed Khan said there were instances of women refusing to wear the veil in the history of Islam.