Nirmala Rajasekar started her concert with a “varnam” in Raga Sahana, in Telugu, seeking divine grace. 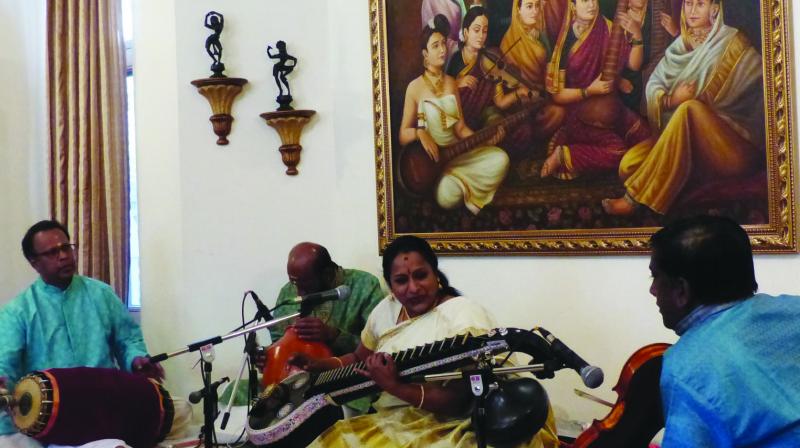 Without a doubt, the optimal way to hear Indian classical music is in the intimate “baithak” setting, with the required close proximity between artistes and audience resulting in inspired performances. The recent Saraswati veena recital by US-based Vidushi Nirmala Rajasekar was a true delight; the maestro explaining her music to the appreciative audience in an unhurried leisurely recital that stretched over three hours. The baithak was held under the VSK banner of patron Vinod Kapoor, who has been bringing baithak concerts to discerning Delhi audiences for decades.

Nirmala Rajasekar started her concert with a “varnam” in Raga Sahana, in Telugu, seeking divine grace. The Carnatic Sahana is akin to the North Indian Sahana, but with differences. Singing the composition while playing as was traditional, gave the performance an added dimension; as did the expert accompaniment on the violin by Vidwan Raghavendra Rao. On the mridangam was Vidwan Thanjavur K Murugaboopathi and on the ghatam Vidwan Ramani. Nirmala shared that that the entire team had arrived from Chennai the day before just for the baithak concert.

Carefully choosing the items she presented, Nirmala presented diverse Ragas with elan. Explaining her choice of Raga Malahari she shared that it was not very popular as a choice for concerts, it was the Raga in which 14th century Purandaradas had composed 4 “geetams” conventionally taught first to young students. After a soulful aalap, she played a composition by Muthuswamy Dikshitar, in whose musical tradition she is an eighth generation practitioner. (Muthuswamy Dikshitar incidentally also played the veena; there is an interesting story of how his veena floated to him in the river Ganga, while he was immersed in it, in Banaras.) The composition, dedicated to Ganapati in Sanskrit was “Panchmatanga”.

Moving next to Tyagaraja’s compositions, the vainika played his “Rama bhakti samarajyam” in Raga Shuddhabangala. She played a vivaadi Raga next, Number 36 in the Melakarta system, Raga Chalanata. The composition in Tamil was by Kooteswara Iyer; again Nirmala prefaced the composition with an aalap. In Kapi Narayani she played the popular Tyagaraja composition “sarasa sama”.

The main piece, on request was in Raga Keervani; one was impressed with the wide range of Ragas presented, with a view to offer many diverse moods. Her technique on the instrument is impeccable; the long slow “meends” visable proof of her absorption of varied musical influences. Her emphasis is on the melody, and exploring the mood of the Raga fully, rather than focusing on “laya” or a display of virtuosity. Her passion for her instrument was verbalised by her “I consider it to be the biggest blessing that I was given this instrument, the veena, when I was just 6. I think of it as my first born; I pray for many lives to be re born as a veena player. Today, there is no life for me without my veena.”

Chatting with the maestro after the concert, she talked about her journey in music.

“I began training in the veena when I was 6; I always wanted to be a professional. I started playing when I was 13 years. When my father was posted in Iran in 1986, I stayed on in Chennai with my grandfather as I could not take the veena there; the Khomeini regime was very strict. When I used to visit my father in Iran for the summer holidays, I used to have to practice on a guitar!”

On her Gurus, Nirmala said, “How they give you parts of themselves! I believe you connect with a Guru only with great luck; it doesn’t happen without a past link. Today I have only one Guru still alive, Kamala Aswathamaji, but I have learnt from many, including T.R.S. Subramaniam sir, Deva Kottai Narayana Iyengar sir, G. Chenamma amma, Sitarama Sarma sir and E.P. Alameluji. I have sat with veena maestro S Balachanderji too, and absorbed from him.

After marriage, I moved to the US, but kept coming back to Chennai every year to continue training and performing. About 14 years, I quit working and devoted myself exclusively to practice. Managing the house and kids and a job and music was too much; though I would wake up at 4 am!”

Constantly experimenting with the veena, Nirmala has come up with smaller sized instruments, using cedar wood to experiment with the tonal quality, instead of the usual jackwood.

I asked about a memorable concert; Nirmala laughed, “A memorable concert was in Turkey, at the festival in honour of Rumi. Ours was the first Carnatic concert ever, and while we were playing the first piece, the audience started clapping enthusiastically! Now I got worried, as at school and college functions, if you hear claps too soon, it’s a sign for the artists to get up, as they are not appreciated!. But my agent came running up to the stage and reassured me!!”

In a lighter vein, Nirmala shared “it has been said, that Tyagaraja’s music can be compared to grapes; its sweet, easy to eat, no complications there. Shyama Sastry’s compositions can be compared to bananas; you have to make the effort to peel to taste the sweetness. Dikshitar’s music is like a jackfruit; you have to peel, oil your hands as the fruit is so sticky, and then eat it, but the quality is so superior.”

In conclusion, Nirmala said, “You can’t talk about music you have to experience it.” Truly her sublime concert endorsed that.

Shailaja Khanna writes about music, musicians and matters of music