Pak 'warns' India against any surgical strikes after Sunjuwan attack

Pak warned India against cross-border strikes in Kashmir after Indian authorities blamed a Pak-based group for an attack on an Army camp. 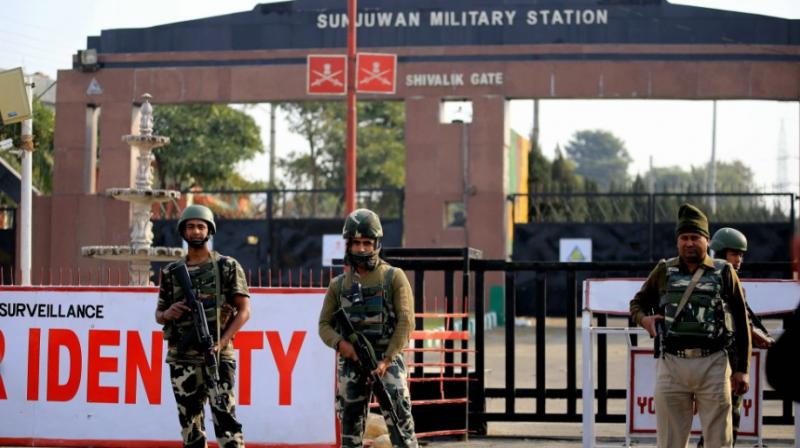 Saturday’s attack on Sunjuwan camp was the worst in months, with five soldiers and the father of one of the soldiers killed and women and children among the ten wounded. (Photo: PTI)

Islamabad/Srinagar: Pakistan warned India against cross-border strikes in Kashmir after Indian authorities blamed a Pakistan-based group for an attack on an Army camp in which soldiers and their families were targeted.

Saturday’s attack on the camp near Jammu, the winter capital of the state of Jammu and Kashmir, was the worst in months, with five soldiers and the father of one of the soldiers killed and women and children among the ten wounded.

India said the heavily armed attackers were members of the Pakistan-based Jaish-e-Mohammad (JeM) militant group, drawing criticism from Pakistan about rushing to judgment without a full inquiry.

“It is a well established pattern that Indian officials begin making irresponsible statements and levelling unfounded allegations, even before any proper investigation in any incident has been initiated,” Pakistan’s foreign ministry said in a statement.

India, it said, was making these allegations to divert attention from its brutality in trying to control the armed revolt in Kashmir, and warned against any retaliatory measures across the Line of Control that divides Kashmir between the nuclear-armed countries.

“We hope that the international community would urge India to stop the untold atrocities and gross violations of human rights in IoK (Indian Occupied Kashmir) (and) refrain from any misadventure across the Line of Control...” it said.

India has long accused Pakistan of training and arming militants and helping them infiltrate across the heavily militarized Line of Control into Jammu and Kashmir, its only Muslim majority state.

The head of the Jammu and Kashmir state police, SP Vaid, told reporters over the weekend that they had communications intercepts pointing to the JeM, which has emerged as a top group fighting hundreds of thousands of Indian forces in Kashmir.

The Army said the attackers wore fatigues and had assault rifles, a grenade launcher and grenades.

In 2016, India said its elite troops had crossed the Line of Control into Pakistan and carried out a raid on militants after 18 soldiers were killed in an attack on an Indian army base in Kashmir.

Pakistan denies giving material aid to the fighters in Kashmir and says it only provides diplomatic and moral support to the Kashmiri people in their struggle for self-determination.

On Monday, Indian soldiers foiled an attack on another camp in Srinagar, the summer capital of Indian Kashmir.