BJD leaders are upset with Patnaik for ignoring them and allowing an IAS officer in the CMO to interfere in party affairs. 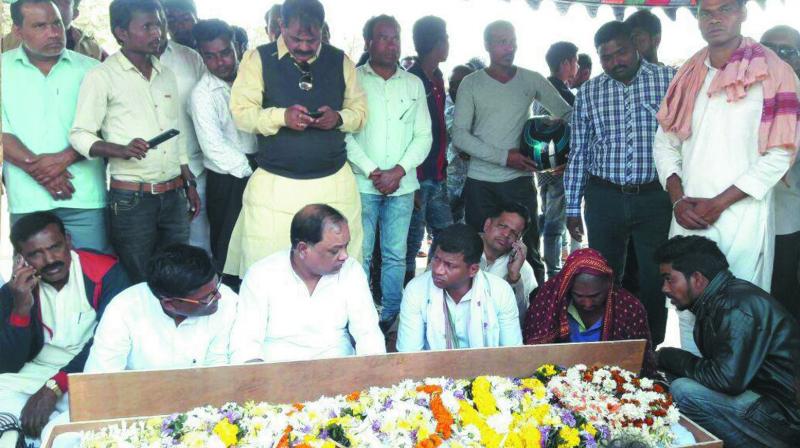 Congress leaders paying homage to the victim who committed suicide allegedly after being denied justice.

Bhubaneswar: Never in his 18 years of rule did Odisha chief minister Naveen Patnaik appear so  ‘‘nervous” and “worried” as he looks now. The suicide by a 14-year-old dalit girl who was allegedly gang-raped by a group of four security personnel on October 10, 2017, is giving nightmares to Mr Patnaik as public outrage over the incident seems to be growing into an anti-government campaign.

The mounting pressure from the Opposition parties, public and civil society to order a CBI probe into the incident has put him in a tight spot.

The Naveen Patnaik government's first reaction on the incident was to declare it a red flag  case and order monitoring of the probe by the district superintendent of police.

When the Opposition dismissed this move as “eyewash,” the chief minister handed over the probe to the crime branch and ordered a judicial probe. However, this failed to pacify the Opposition which insisted on a high-level impartial probe.

While Congress remained firm on its demand for a probe monitored by the Orissa high court, the BJP, at present the principal adversary of the ruling BJD, made it clear that it will not accept anything other than a CBI probe.

Buckling under pressure, Mr Patnaik changed his mind and ordered a probe by a Special Investigation Team under the supervision of the high court.

The frequent change of mind by the chief minister on the probe  is being viewed in political circles as his “falling support base” among party leaders who in the past stood solidly behind him.

The leaders are upset that Mr Patnaik, instead of running the administration with the aid and advice of his party lawmakers, is governing in accordance with the “whims and fancies” of the IAS officer, jeopardising the interest of the state.

Disgruntled BJD leaders have also blamed the chief minister for “doing little” to arrest the culprits involved in the gangrape.

They also hold Mr Patnaik responsible for the death of the gangrape victim who on January 22 committed suicide after waging a battle for nearly 100 days after the gruesome incident in October.

Before committing suicide, the girl hailing from Sorisapadar village and studying in Class V, had alleged serious mental torture by the state police to change her charges. She also alleged that  the men sent by state director general of police had offered a bribe of `90,000 to keep mum.

What has added to the woes of the chief minister is some unconvincing activities by his own administrative setup.

On October 27, 2017, Koraput district superintendent of police Kanwar Vishal Singh, quoting a medical report, said the girl was never raped and the allegations made by her were false.

On November 7, 2017, the additional director general (ADG) of the Human Rights Protection Cell (HRPC) of Odisha Police, in a letter to the Odisha Human Rights Commission, also denied rape of the minor girl.

The government faced a huge embarrassing situation when, on January 25, 2018, the preliminary report of the State Forensic Laboratory (SFL) was leaked to media. The report clearly confirmed rape of the victim.

The next day, the SFL, apparently under pressure, said that the final report had overruled the girl’s rape. This reply, however, has failed to convince the Opposition parties and civil society. They have intensified their agitation against the state government's inaction against the accused.

Former Congress MP from Nabarangpur, Pradeep Majhi, has alleged that the CoBRA (Commando Battalion for Resolute Action) battalion jawans who were deployed in Kunduli area were surprisingly shifted on the pretext of training to cover up the incident. The victim’s description of of the culprits had created doubts if those involved in the crime were CoBRA jawans, he claimed.

“Mr Patnaik must not forget that in 1999 Anjana Mishra gang-rape case, the then Congress government had changed the SFL report. It also vainly tried to shield the culprits but the CBI caught everybody and the culprits were punished. Finally, the people of Odisha dealt the party a death blow and it is out of power in Odisha since 2000. The egoist BJD government will meet the same fate,” warned the Union minister and senior BJP leader Dharmendra Pradhan An NHRC team is currently in Koraput for a probe. 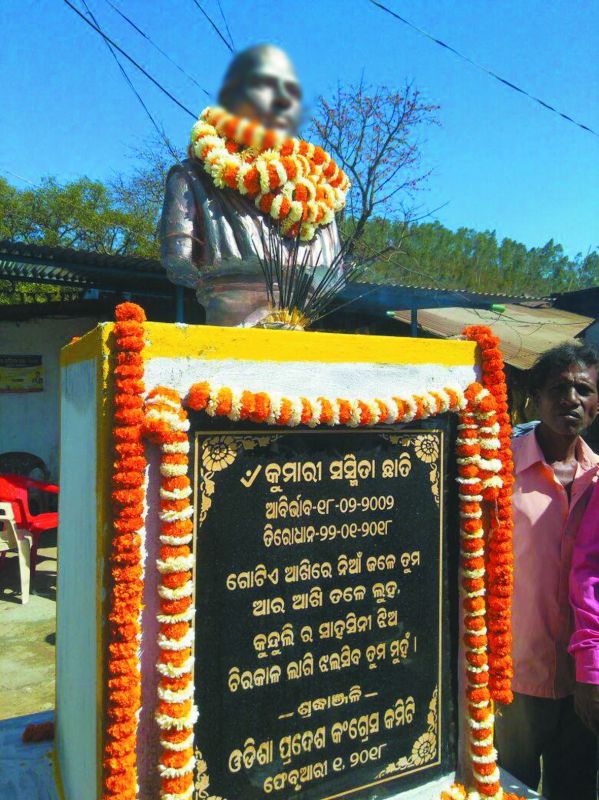 The victim’s statue built by Cong. and BJP leaders.

A minor’s fight for justice stirs up A storm
Oct. 10, 2017: The 14-year-old girl was allegedly gang-raped while returning home from local Kunduli market in Odisha’s Koraput district. The victim’s description of the appearances of the culprits had created doubts that jawans of the state’s commando force were involved in the crime.
Oct. 11: Congress called for Koraput bandh demanding arrest of culprits
Oct. 12: Odisha DGP R.P. Sharma declared the incident as as ‘red flag’ case
Oct. 27: Koraput SP denied that the girl was raped
Nov. 7: ADG of Human Rights Protection Cell (HRPC) of Odisha police also denied rape of the girl
Nov. 8: Odisha CM ordered a probe by crime branch and a judicial inquiry
Jan. 25, 2018: Preliminary report of the State Forensic Laboratory (SFL) leaked to media confirmed that the girl was ‘raped’ by at least 2 persons
Jan. 26: FSL said preliminary report was incorrect and claimed rape was ruled out in its final report
Jan. 29: DGP ordered probe into discrepancies in FSL preliminary and final reports
Feb 5: The BJP dared the CM to order CBI probe in the incident
Feb. 7: Buckling under pressure, the CM ordered HC-monitored probe