A report said that a youth was injured after Army personnel opened fire on protesters after they came under stone pelting in Barthipora village. 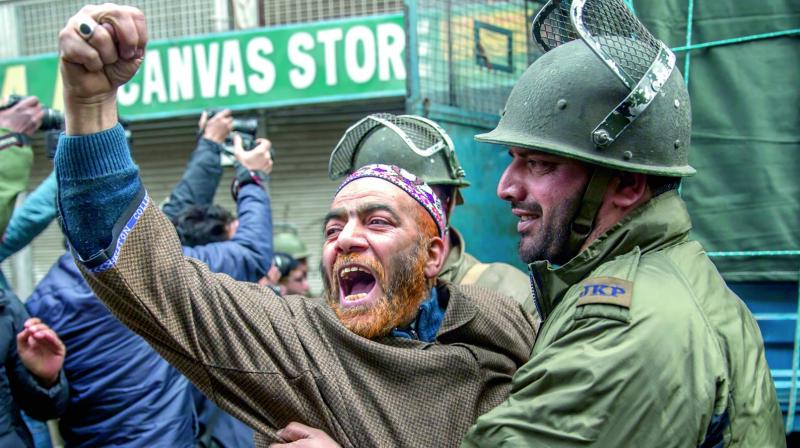 A supporter of All-Parties Hurriyat Conference is detained by the police during a protest on the death anniversary of separatist leader Maqbool Bhat in Srinagar. (Photo: AP)

Butt was hanged in Tihar jail on February 11, 1984, more than 16 years after a court in Srinagar had sentenced him to death on charges of murdering an Indian intelligence official Amar Chand way back in 1966.

While the shutdown cal-led by “Joint Resistance Leadership” (JRL), an alliance of key separatist leaders, brought life to a standstill in most parts of the Valley, the J&K police and CRPF enforced a security clampdown in central Srinagar areas to hold back protests. Shut-down was also observed in the highway town of Banihal.

The security forces also foiled a march by JKLF activists on the summer headquarters of the United Nations’ Military Observers Group in India and Pakistan, where they had planned to submit a memorandum demanding return of Butt’s mortal remains. Butt was buried within the jail premises after the hanging.

A report from southern Shopian said that a youth was injured after Army personnel opened fire on protesters after they came under stone pelting in Barthipora village of the district. The injured youth has been identified as Aadil Ahmed Wagay, a resident of Shopian’s Nadpora village. He received a bullet wound in his right leg and his condition is stable, police sources said.

Earlier, thousands of people attended the funeral of teenage girl Saima Wani, who died in a Srinagar hospital on Saturday night. She had been injured during a gunfight between militants and security forces in Shopian’s Chaigund village on January 24.