The clashes erupted soon after one civilian was killed in the encounter between security forces and militants. 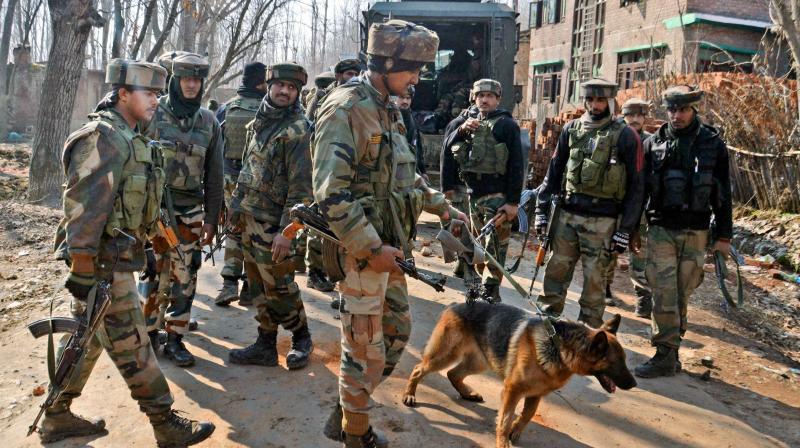 Army personnel along with a sniper dog move towards the house where militants were hiding during an encounter at Frisal area of Kulgam district of south Kashmir on Sunday. (Photo: PTI)

Srinagar: Four Islamic militants, two Army jawans and a civilian were killed in a fierce gunfight in a remote village of Jammu and Kashmir’s southern Kulgam district Sunday.

Intense clashes erupted between the security forces and local residents soon after a civilian was killed in the encounter, leaving one more person dead and scores others injured. Fifteen of them have received bullet wounds, reports said.

An Army Major and three of his men have also been injured in the clash with militants. The injured soldiers were airlifted to Srinagar and admitted to the 92-base Hospital at the 15 Corps headquarters in Badami Bagh Cantonment in Srinagar. The Army sources said that while the condition of the injured officer is "very critical", the other soldiers are "stable."

Both the Army and Jammu and Kashmir police termed the killing of militants as a “major breakthrough” against Lashkar-e-Taiba and Hizb-ul-Mujahedin. Reports said two slain men belonged to each of these outfits.

The police officials in Srinagar said that members of its counterinsurgency Special Operations Group (SOG) along with the troops from Army's 1 Rashtriya Rifles and CRPF laid siege to Heragam hamlet of Kulgam's Frisal area at 4.30 am following a tip-off about the presence of militants.

They said that after laying barrier around the village, the troops started a house-to-house search but did not find any militant. The SOG men, however, insisted that their "source" who alerted them about the presence of militants in the village could not be wrong. On their insistence, a particular house was searched again during which the security forces found a false ceiling where the militants were hiding. On being spotted, the militants opened fire at the soldiers, who were accompanied by the house owner and his son.

The two soldiers who lost their lives in the militant firing have been identified as Lance Naiks Raghubeer Singh and Bhandoriya Gopal Singh. The house owner’s son Adil Reshi was caught in crossfire and died instantly, police officials said.

Soon after the pre-dawn swoop by the security forces, hundreds of residents relocated to the encounter site chanting pro-freedom slogans and hurling stones at uniformed men.

Scores of protesters were injured in ensuing intense streets clashes with the security forces and one of them identified as 22-year-old Mushtaq Ahmed too succumbed to a bullet wound in a hospital in neighbouring Anantnag town later. The hospital sources said that, at least, fifteen people have sustained bullet wounds as apparently the security forces fired indiscriminately at the people mourning and protesting the killing of militants. Four of the seriously injured civilians have been brought to a Srinagar hospital for specialized treatment.

J&K's Director General of Police, S.P. Vaid, termed the killing of the militants as a "major success" against militants and those of the two Army jawans and the civilian (house-owner's son) in the encounter as "unfortunate."