Have no objection to WB BJP chief's criticism: Amartya Sen

'He has done what he has felt and has the right to do so if he feels so,' Sen said reacting to Dilip Ghosh's comments. 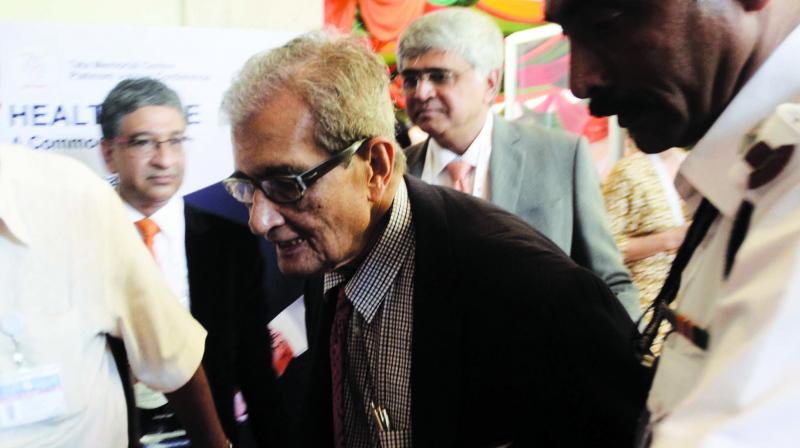 Kolkata: Nobel laureate and renowned economist Amartya Sen on Sunday said he has "no objection to the criticism" by West Bengal BJP chief Dilip Ghosh who questioned his contribution to the state and the country.

"I do not have any objection. He has done what he has felt and has the right to do so if he feels so," Sen said reacting to the comments.

Ghosh had yesterday said, "A fellow Bengali among us has won the Nobel Prize and we are proud... But, what has he done for the state? What has he given to the nation? No one in Bengal understands him."

The attack by Ghosh, who is known for his often foot-in-the-mouth observations, against the Bharat Ratna awardee drew all-round criticism for the second day today.

West Bengal Congress chief Adhir Ranjan Chowdhary hit out at the BJP leader, saying, "When a person is respected and honoured around the globe, who is Dilip Ghosh to question him? Actually, this is the culture of BJP and RSS."

"They cannot think beyond Deendayal Upadhyay, Vir Savarkar and the person who killed Mahatma Gandhi... They do not think that other than these people anybody else has done anything for the country. That's why these days we are seeing Narendra Modi humiliating Manmohan Singh in such a demeaning manner," Chowdhury said.

Addressing a gathering, Ghosh had said, "He (Amartya Sen) is in extreme pain because he was removed as the Chancellor of Nalanda University. Such people are spineless and they can be purchased or sold and can stoop to any level."

Former Lok Sabha MP Krishna Bose had said yesterday, "I am ashamed of hearing this sort of indecent attack against Dr Sen. These comments are below my dignity and do not even qualify for criticism. I believe, comments like these also don't matter for Dr Sen as the nation knows him well."