As the security forces were closing in on the position of the militants, the ultras opened firing resulting in injuries to five soldiers. 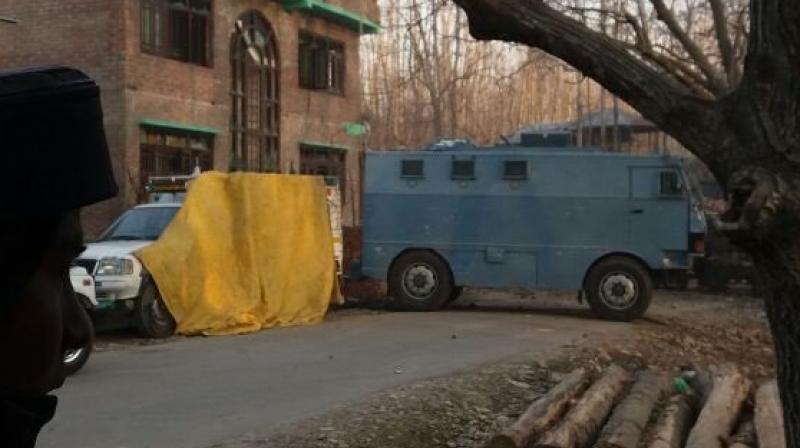 Images of the house, where the militants were reportedly holed up in J&K’s Kulgam (Photo: Twitter)

Kulgam: In a pre-dawn swoop, security forces on Sunday gunned down four Hizbul Mujahideen militants in an encounter in a village in south Kashmir that also left two army men and a civilian dead.

Three army personnel, including an officer, were injured in the operation and airlifted to Army's 92 base hospital in Srinagar. Their condition was stated to be stable, a police official said.

Director General of Police S P Vaid told PTI that security forces have achieved a "major success" by gunning down the four militants. "However, it is unfortunate that two soldiers were martyred and son of the house owner got caught in the cross-fire and succumbed to injuries," he said.

Asked about the encounter, Minister of state Jitendra Singh told reporters in Delhi that terrorism on Indian soil is being sponsored by Islamabad.

"There has been a series of evidences and it is now no longer a secret that the entire terrorism on Indian soil, particularly in Jammu and Kashmir, is being promoted, perpetuated and sponsored by Islamabad," he said.

The minister lauded the forces for working under difficult circumstances.

"They (forces) are operating under most difficult circumstances and have beyond doubt proven themselves as one of the best forces in the world," he said.

Giving details of the encounter, official sources said that acting on a tip-off of Jammu and Kashmir Police, a cordon was thrown around Nagabal Village in Frisal, about 70 kms south of Srinagar by the army, police and para-military forces at around 4.30 AM.

They said the intelligence input was clear that militants were hiding in a house in the village following which a cordon was thrown around the locality.

A repeated check of all the houses yielded no success but the police personnel accompanying the raiding party insisted on rechecking a house.

The personnel from One Rashtriya Rifles, which forms part of the Victor Force counter-insurgency grid of army in South Kashmir, and Special Operation Group of State police again carried out a search inside the house and found a false ceiling where the militants were hiding.

On being spotted, the troops, who were accompanied by the house owners, came under heavy fire in which two jawans identified as Lance Naik Raghuvir Sigh and Lance Naik Gopal Singh Badoria were killed.

In the gunbattle thereafter, three militants managed to escape in the nearby jungles while four other militants belonging to banned Hizbul Mujahideen outfit were killed.

Out of the four militants, three have been identified as Mudasir Ahmed Tantray, Farooq Ahmed Dar and Azhar Ahmed.

Effort was on to identify the fourth one.

Four weapons have been recovered from the scene of the gunbattle as security forces were also trying to ascertain the identity and group affiliation of the slain militants.

Clashes between protestors and law enforcing agencies broke out soon after the encounter ended, the police official said, adding further details were awaited.