Justices J Chelameswar, Ranjan Gogoi, Madan B Lokur and Kurian Joseph alleged that the situation in the Supreme Court was not in order. 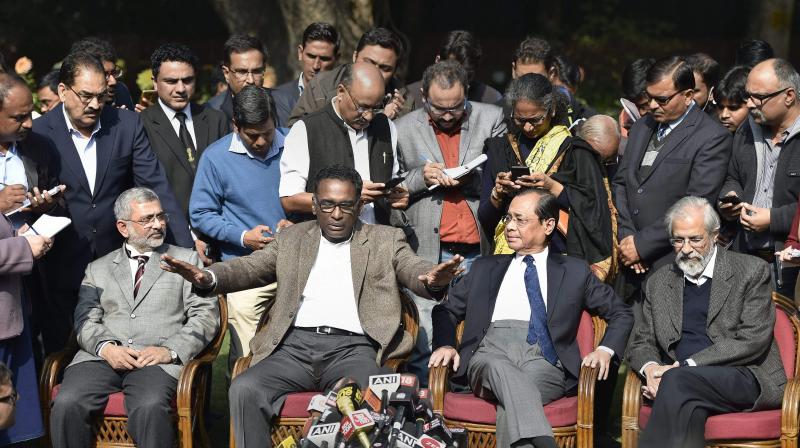 In an apparent warning, the judges said lack of impartiality in allocation of high profile cases and constitution of benches with junior judges could imperil India’s democracy. (Photo: PTI)

New Delhi: In an unprecedented move in the annals of judiciary, four senior most judges of the Supreme Court on Friday questioned the “unilateral and biased” decisions of the Chief justice of India Dipak Misra in allocation of “important” cases to junior judges.

In a joint press conference, Justice J Chelameswar (number 2 in seniority), Justices Ranjan Gogoi (number 3) Madan B Lokur (number 4) and Kurian Joseph (number 5), who felt that they were being sidelined, alleged that the situation in the Supreme Court was not in order and said many "less than desirable" things have taken place in the last few months. The conference was held at the residence of Justice Chelameswar, who led the briefing.

In an apparent warning, the judges said lack of impartiality in allocation of high profile cases and constitution of benches with junior judges could imperil India’s democracy.

They said though they wrote a seven-page letter to the CJI two months ago (on allocation of work), the allocation of two petitions on Friday seeking a probe into the death of former CBI sessions judge BH Loya who discharged BJP President Amit Shah in the Sohrabuddin fake encounter case, to a bench headed by Justice Arun Mishra (number 10 in the rank) triggered the controversy.

Meanwhile highly placed sources in the judiciary denied that the CJI was taking decisions in a biased manner. It was pointed out “the CJI’s conscience is clear. All high profile cases are allocated uniformly to the top four judges, Chelameswar, Gogoi, Lokur and Joseph.” Sources refused to comment on the allegation relating to composition of Constitution Benches with junior judges, except saying “there is no bias and norms are being followed.”

Justice Chelameswar said “this is an extraordinary event for the history of any nation, more particularly this nation, an extraordinary event in the history of this institution of judiciary. It is with no pleasure we are compelled to take this call for a press conference but sometimes the administration of the Supreme Court is not in order and many things which are less than desirable which have happened in the last few months.”

He said, “We tried to collectively persuade the Chief Justice that certain things are not in order and therefore remedial measures need to be taken, unfortunately our efforts failed.”

Asked whether allocation of petitions in Loya’s case was the flash point, they said “we all met the CJI in his chambers this morning with a specific request, which unfortunately could not convince him that we were right; therefore, we were left with no choice to but to communicate it to the nation.”

They said, “All four of us are convinced that unless this institution is preserved and it maintains its equanimity, democracy will not survive in this country or any country. For a survival of a democracy it is said that a hallmark of a good democracy is an independent and impartial judge".

To a specific question “what are the remedies now? Do you want the Chief Justice of India to be impeached?” Justice Chelameswar said, "We are not saying anything now. Let the nation decide, we are nobodies to decide.”

On his part Justice Gogoi said “Whatever Justice Chelameswar has told you is the whole of it, it is the discharge of a debt to the nation that has brought us here and we think that we have discharged the debt to the nation. More is in the letter, beyond this I don't think there is any other issue we need to address".

Justice Gogoi said, “I don’t want another 20 years later wise men in this country blame that Chelamesawar, Ranjan Gogoi, Madan Lokur and Kurian Joseph sold their souls, they didn't take care of this institute. So we place it before the people of this country. We don’t want to say anything more. The letter speaks for itself.”