Asked Chief Justice for remedy, but our efforts failed, say judges; 'let nation decide if he is to be impeached'. 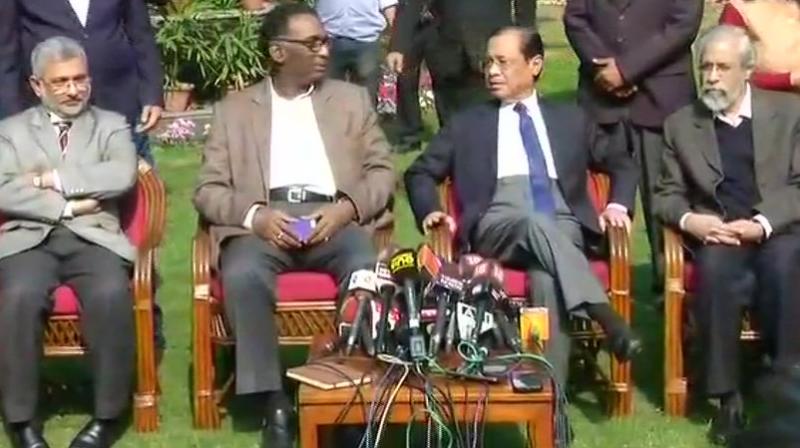 New Delhi: Four top Supreme Court judges virtually rebelled against the Chief Justice of India on Friday, saying the apex court was beset by problems that had the potential to destroy Indian democracy.

In an unprecedented move – first in the history of Indian judiciary – the four senior judges held a press meet to say that “sometimes administration of the Supreme Court was not in order and many things which are less than desirable have happened in the last few months”.

The four – Justices J Chelameswar, Ranjan Gogoi, Madan Lokur and Kurien Joseph – addressed the media at Justice Chelameswar’s home, an event that Chelameswar said was “extraordinary in the history of any nation” but that they were “compelled” to do it.

The judges went public with their grievances against Chief Justice of India Dipak Misra, saying “unless the judiciary was preserved, democracy can’t be protected in the country”. The justices did not elaborate on the issues "only to avoid embarrassing the institution but note that such departures have already damaged the image of this institution to some extent".

They sent a seven-page letter to the Chief Justice, (read below), saying while he was the "master of the roster", he was "only the first among equals -- nothing more or nothing less". It looks like they did not agree with the allocation of work by Chief Justice Dipak Misra.

“Let the nation decide that,” Justice Chelameswar said when asked if the Chief Justice of India should be impeached.

“We met the CJI today with a specific request which unfortunately couldn't convince him that we were right… therefore, we were left with no choice but to communicate it to the nation to please take care of the institution,” Chelameswar said.

Asked to give an example of what was not in order, Justice Chelameswar said: “A couple of months ago, the four of us gave a signed letter to the CJI. We wanted a particular thing to be done in a particular manner. It was done but in such a way that it raised further questions about the integrity of institution. The same thing happened this morning.”

Read Also: Here’s the text of letter given by 4 top judges of SC to CJI

Justice Chelameswar added: “All our efforts have failed and we are all convinced that unless this institution is preserved, democracy can’t be protected in the country.”

The open dissent has left the judiciary and observers stunned, leaving uncertain how this open dissension in the hallowed institution would be resolved.

All judges rubbished questions on whether they have broken ranks and said that they will start doing things which they do.

Justice Gogoi said, "Nobody is breaking the rank and it is discharge of debt to nation which we have done."

Gogoi, who will be succeeding Misra as CJI in October this year, said, "it's a discharge of debt to the nation which we have done."

After the press conference, Prime Minister Narendra Modi called the law minister and officers to discuss the issue.

Government sources said it was an internal issue of the Supreme Court, related to the administration of justice. This indicates the government is unlikely to interfere.

"It is a sad day for the judicial system," said Congress leader Ashwani Kumar, also a senior advocate.