The features of this Scorpene class submarine include superior stealth and ability to launch a crippling attack on the enemy. 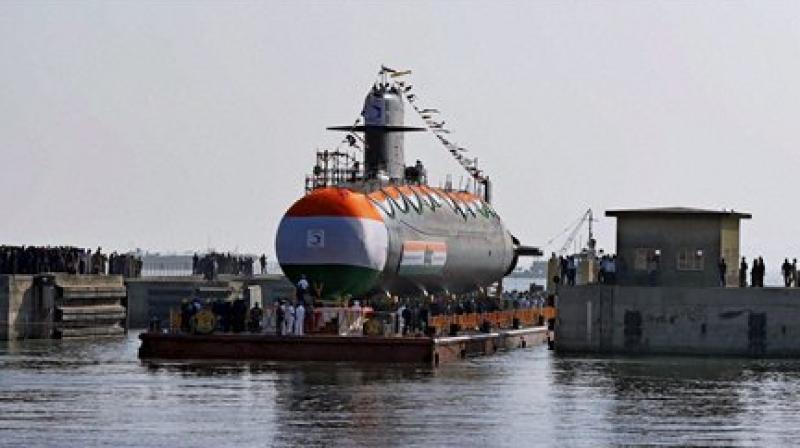 Mumbai: Khanderi, the second Scorpene class submarine that has superior stealth and the ability to launch a crippling attack with torpedoes as well as tube-launched anti-ship missiles whilst underwater or on surface, was on Thursday launched at the Mazagon Dock Shipbuilders Limited (MDL) in Mumbai.

Union Minister of State for Defence Subhash Bhamre presided over the function to initiate the launch of Khanderi (Yard 11876).

The submarine was launched by the Union minister's wife, Bina Bhamre.

Chief of the Naval Staff, Admiral Sunil Lanba was also present on the occasion when the submarine was separated from the pontoon on which it was assembled.

The state-of-the-art features of this Scorpene class submarine include superior stealth and the ability to launch a crippling attack on the enemy using precision guided weapon.

The attack can be launched with torpedoes, as well as tube-launched anti-ship missiles, whilst underwater or on surface. The stealth features will give it an invulnerability, unmatched by many submarines.

The submarine is designed to operate in all theatres, including the tropics. All means and communications are provided to ensure interoperability with other components of a Naval task force.

Khanderi is the second of the six submarines being built at MDL in collaboration with M/s DCNS of France, as part of Project 75 of Indian Navy. The first one, Kalvari, is completing sea trials and will be commissioned shortly into the Indian Navy, a defence official said.

The Indian Navy's submarine arm will complete 50 years on December 8 this year.

The Submarine Day is celebrated every year to commemorate the birth of the submarine arm with induction of the first submarine, erstwhile INS Kalvari, into the Indian Navy on

India joined the exclusive group of submarine constructing nations on February 7, 1992, with the commissioning of the first Indian-built submarine, INS Shalki.

The MDL built this submarine and went on to commission another submarine, INS Shankul, on May 28, 1994. These submarines are still in service today.

Khanderi is named after the Island fort of Maratha forces, which played a vital role in ensuring their supremacy at sea in the late 17th century. Khanderi is also the name for

Khanderi is named after the Island fort of Maratha forces, which played a vital role in ensuring their supremacy at sea in the late 17th century. Khanderi is also the name for

The launching of Khanderi also marks a critical milestone event for the shipyard which earlier has delivered two Shishumar class submarines in the 90s and has now strengthened its position as a submarine building yard for Indian Navy.

Started as a small dry dock facility for East India Company, MDL has established itself as a forefront Defence

Public Sector Undertaking, with indigenous construction of several ships and submarines for Navy such as P 15 B Destroyers and P 17 A class stealth frigates being the latest.

The construction of six Scorpene submarines is presently in progress at Mazagon Dock Shipyard Limited (MDL), under Project 75 with Transfer of Technology from M/s DCNS, France as the collaborator.

At the launch event, Bhamre lauded MDL, saying it is the country's premier shipbuilding yard and has a rich history that dates back to 1774.

"It did the country proud when it became the first shipyard in the country to build submarines, when the MDL built INS Shalki was commissioned in 1992," he said.

"Despite facing numerous challenges, particularly delays due to material issues, MDL has successfully overcome all these challenges with typical determination and innovativeness of the work force. This speaks volumes about the technological prowess and skill set of this premier shipbuilding yard," he said.

"However, after MDL built the two SSK submarines, which were commissioned in 1992 and 1994, this critical skill was almost lost thereafter due to lack of orders for building submarines," he said.

The MoS further said that, "With the first submarine of the Scorpene class having successfully completed the deep dive trials and with the launching of this second submarine,

MDL has proved beyond doubt that they have regained the world class skills required for submarine construction."

"It is therefore incumbent that we ensure that this critical skill set is not wasted, and is optimally utilised for constructing more submarines for our Navy. We will also optimally utilise the world class infrastructure set up here for submarine construction," he said.

Bhamre also said that though MDL has always been in the forefront of warship and submarine building in India, it will have to face competition from the private industry.

"Knowing MDL, it will utilise this as an opportunity to re-invent itself to meet the challenge head-on. You have the capability, and I know that you will rise to the occasion," he said.

"This potent submarine Khanderi is a symbol of the capability of our great nation, a shining example of the 'Make in India' programme. It is a key milestone in attaining self-reliance in the vital field of submarine construction," he added.