India   All India  12 Jan 2017  Black money has destroyed nation, fight against it: PM to youth
India, All India

Black money has destroyed nation, fight against it: PM to youth 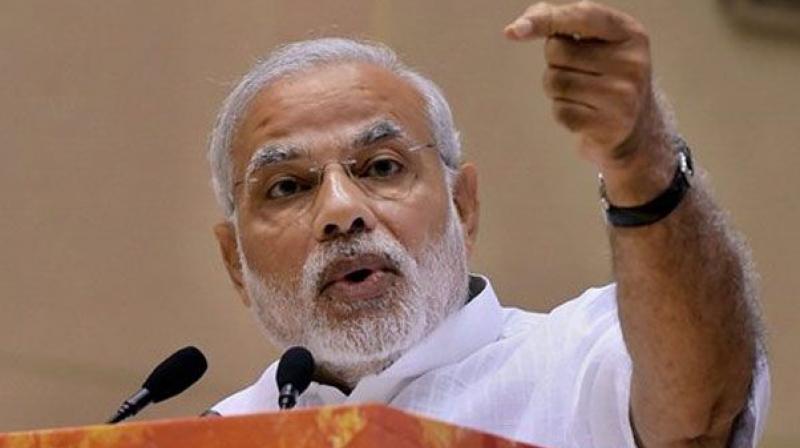 Rohtak (Haryana): Contending that black money had "destroyed" the country, Prime Minister Narendra Modi on Thursday reached out to the youth, asking them to fight against it along with social problems like caste discrimination, untouchability and harassment of women.

Hailing the youth for their contribution to various aspects of the society, he pitched for new thinking while underlining the need for channelising the tremendous energy of the young people and preventing them from getting misled.

The Prime Minister asked the youth to focus on six social challenges -- ending of illiteracy, insensitivity, perverted thinking, failure to rise above caste considerations, ill-treatment of women and callous attitude towards the environment.

"Black money has destroyed the country... Recently we took a major decision to fight black money. The youth have put in their energy into this," he said while referring to demonetisation under which Rs 500 and Rs 1000 currency notes were withdrawn.

Modi, while addressing the 21st National Youth Festival by video conferencing, underlined that over 80 crore people aged under 35 years can contribute immensely to the social changes.

He specifically asked them to fight against caste discrimination, black money and untouchability while focusing on 3Cs -- collectivity, connectivity and creativity.

Talking about 'collectivity', he emphasised the need for unity by ending discrimination, saying it is a big power.

About 'connectivity', he said technoloogy has reduced distances and technology is the demand of time.

With regard to 'creativity', he underlined the need for new views, new thoughts and new approaches.

"If new thinking ends, the life comes to a standstill. Give priority to new thinking. Work on new thoughts...don't pay attention to what others say," he told the youth.