Waves can happen even without a new variant, he said 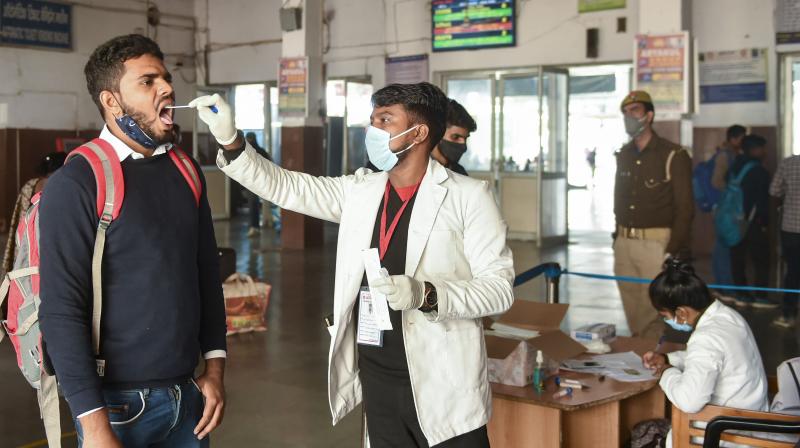 Noting that new variants are bound to emerge, he said the general tendency is that newer variants should be milder and more infectious. (Representational Image:PTI)

Hyderabad: Observing that data on the new SARS-CoV2 variant, Omicron, is still emerging, an expert has said the very high rate of 'seropositivity' should keep the country in good stead even as he emphasised on increased vaccination coverage and adhering to COVID-appropriate behaviour.

"Because, India has the advantage of very high rate of 'seropositivity' of 70, 80 per cent, and in big cities more than 90 per cent people already have antibodies," Rakesh Mishra, former Director of CSIR-Centre for Cellular and Molecular Biology (CCMB) here, told PTI.

In view of the protection available to people, even if they get infected, it will be very mild and most of the time asymptomatic, Mishra, currently Director, Tata Institute for Genetics and Society (TIGS), Bangalore, said.

It would help the cause in a big way if vaccination coverage is further expanded and if vaccines for children are rolled out, he noted.

The spread of Omicron almost looks certain in the country though data is still emerging, but the situation would be better than with Delta as the symptoms appear to be only milder.

However, there is no scope for lowering guard as the virus should be prevented from becoming more virulent. The only way to do that is wearing masks properly, maintaining social distance and vaccination, he stressed.

Asked about the possibility of a third wave hitting the country in February or March next year as predicted by some, coupled with the threat of Omicron, he said waves are happening in Europe even without Omicron.

Waves can happen even without a new variant, he said.

The country has the advantage of a heavy rate of infection from the second wave, Mishra said.

Even if the number of cases increase, he said he does not see the possibility of increased hospitalisations and problems of oxygen arising.

In the same breath, the former official of CCMB emphasized on COVID-appropriate behaviour, including avoiding exposure in closed spaces, and vaccination.

He warned of a mild wave if there is laxity in following the safety norms.

Noting that new variants are bound to emerge, he said the general tendency is that newer variants should be milder and more infectious.

However, it is possible that an unexpected bad variant may emerge.

Not wearing masks and not taking vaccination would help the virus grow which would be harmful to people with weak immunity or the unvaccinated people, Mishra said.

But, many institutes and those in foreign countries are developing specific RT-PCR kits that can detect Omicron-specific infection.

But, it will be weeks before they are available in the country, he added.