Will INS Viraat be allowed to rest in peace?

Will the INS Viraat at least be allowed to go back to her place of origin? Or will she come under the shipbreakers’ tools? 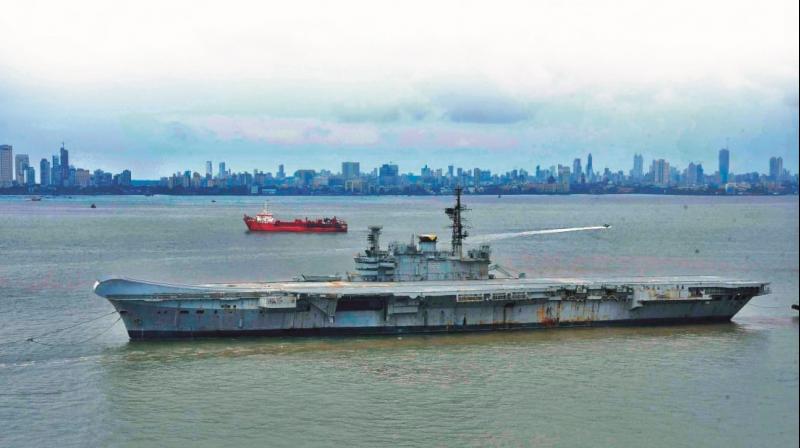 A file picture of INS Viraat

On September 20 this year, Indian Navy aircraft carrier INS Viraat headed out from Mumbai port on the last leg of her journey - to Alang in Gujarat. Since the aircraft carrier was decommissioned in 2017, there have been several initiatives and requests made by the Indian Navy, state governments and private parties to save the ship and make a museum out of it. However, all the proposals were rejected by the Ministry of Defence (MoD). The latest was a proposal by Envitech Marine Consultants Pvt. Ltd to buy it from the current owner of the ship, Shree Ram Shipbreakers Company, which too was turned down by the MoD.

The Viraat originally belonged to the British Navy as HMS Hermes, and was commissioned into the Indian Navy after it was acquired by the Indian Government in 1987.

Now, ahead of the likely visit of British Prime Minister Boris Johnson as Chief Guest at the Republic Day celebrations next month, David Campbell Bannerman, a director of The Hermes Viraat Heritage Trust, has written to India’s Prime Minister Narendra Modi and the UK Prime Minister, seeking their intervention in saving the big lady. The Trust has appealed to both leaders to convert Viraat, which served with distinction in the Royal Navy for 27 years, into a floating museum.

The Trust has suggested that if all else fails, India should allow the 23,900-tonne warship to be towed back to the UK where a maritime museum can be set up. A former member of the European Parliament from Britain has also backed the efforts of the Trust.

A Proud History - ‘Who cares’

INS Viraat is the longest-serving aircraft carrier in the world – from November 1959 as HMS Hermes (she took part in the Falklands War against Argentina in 1982) till her decommissioning in 1982 – and for 29 years since she was commissioned into the Indian Navy on May 12, 1987.

Interestingly, the Andhra Pradesh, Goa and Maharashtra Governments tabled offers to buy the aircraft carrier, but subsequently backed out. “We can presume that the resources were not available. But when the MoD had written the ship off, it is incomprehensible why an NOC is not being given to this private party,” says Admiral Arun Prakash, (Retired), who was one of the officers to welcome INS Viraat along with the then Prime Minister Rajiv Gandhi on board in 1987 and subsequently commanded the ship in 1990–1991.

He feels it would be fair to give the ship to the Trust. “It will cost them money, but they are people who have more respect for history and warships than us, so let them preserve it. It’s half British and half Indian. We have the money to build statues of politicians and redesign the Parliament, but here is an iconic ship which has a great maritime history, and we fail to preserve it. So if this is going to make us a laughing stock, then we deserve to be a laughing stock,” he asserts.

Wanted - A Maritime Consciousness but no initiatives

INS Viraat is the second aircraft carrier slated to be broken down in India. In 2014, INS Vikrant was dismantled in Mumbai. Many veterans tried to save the grand ship, but the Government of India failed to preserve the indigenous vessel. If, as stated by the Prime Minister, India is interested in maintaining its maritime dominion, then the country has to create a maritime consciousness, as opposed to a naval one. Saving INS Viraat would be a major step in this direction.

“The Government of India and particularly the MoD doesn’t see INS Viraat anything other than a ship which is a piece of metal. The metal will be sold for X amount of money. As the saying goes, ‘operation successful, patient is dead’,” says Vice-Admiral Pradeep Chauhan, (Retired), who commanded INS Viraat in 2004–2005. Admiral D.K. Joshi, (Retired) currently the Lieutenant Governor of Andaman & Nicobar Islands, who was the 11th commanding officer of the aircraft carrier in 2001–2003, also expressed similar sentiments.

Clearly, the MoD is unable to grasp its role as the custodian for the natural and national maritime resources of India. On the other hand, The Hermes Viraat Heritage Trust was incorporated in Britain not just for the nostalgia of HMS Hermes but for the sake of the Navy and the love for the warship and the aircraft carrier. “Seeing that the Government of India and its people have neither real interest nor the money, the Trust wants to bring her back to the UK. We know how to talk, we do not know how to deliver. Our pockets are shallow, unless we have some religiosity we are not able to develop philanthropy,” asserts Vice-Admiral Chauhan.

“The UK is full of history and they proudly preserve it, but India doesn’t believe in that. Unless there is political mileage, it doesn’t interest the present government,” claims Admiral Prakash.

Lieutenant Commander Jagbir Singh, who served on INS Viraat in 1987-1988, is also baffled by the situation. “The present government has no regard for defence assets built up over the last seven decades,” claims the officer.

So far, the Indian Navy has done its best to protect its history, traditions and heritage, but for it to continue doing so, the Indian Government’s support is essential.

On the other hand, the British Government, who’d owned the ship once and sold her to India, still reminisces that each of the ‘brick in the wall’ that built her is a foundation on which the maritime nation was built.

If only the Indian Government added substance to the “visionary statements” it doles out in its speeches!