BJP national general secretary Kailash Vijayvargiya and vice-president Mukul Roy were injured in the rain of bricks, stones and bottles 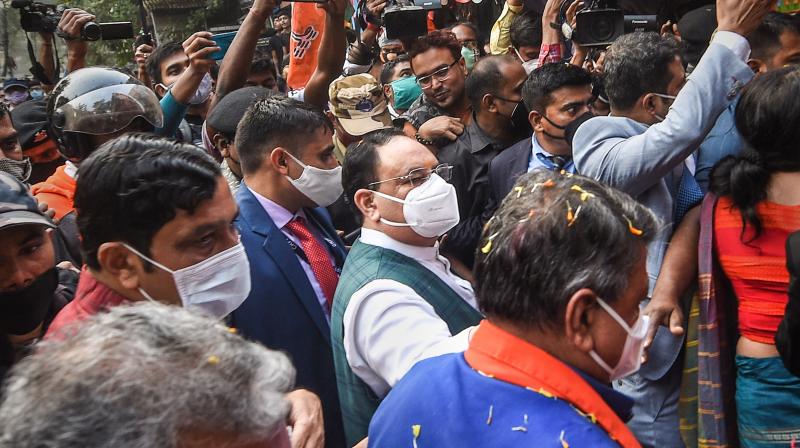 BJP National President JP Nadda is greeted by his party supporters on his arrival in Kolkata, Wednesday, Dec. 9, 2020. Nadda is on a two-day visit to West Bengal from today. (PTI)

Kolkata: BJP president J.P. Nadda, in a convoy with several other party leaders, came under a violent attack, allegedly by the ruling Trinamul Congress workers, at Diamond Harbour in South 24 Parganas of  West Bengal on Thursday afternoon for reportedly daring to make inroads into the Lok Sabha constituency of Chief Minister Mamata Banerjee’s nephew Abhishek Banerjee.

The unprecedented incident took place a day after the BJP chief slammed the Trinamul Congress for political dynasty and also led a rally in party supremo Mamata Banerjee’s Assembly constituency in Bhowanipore without any trouble.

Though Nadda, who enjoys Z-category security cover by the Central Reserve Police Force, escaped unhurt, he informed that BJP national general secretary Kailash Vijayvargiya and party’s national vice-president Mukul Roy were injured in the rain of bricks, stones and bottles thrown by the angry TMC supporters, who shouted “go back BJP” slogan, after blocking the convoy’s way in Shirakol.

Apart from them, the cars of West Bengal BJP chief Dilip Ghosh and five more leaders were also damaged.

Braving the attack on the second and final day of his state tour, Nadda along with others reached Diamond Harbour and lashed out at the Chief Minister and her nephew.

“While coming here I witnessed how Bengal has slipped into anarchy under Mamataji’s misrule. It has become a state of lawlessness and intolerance. Only Maa Durga’s blessings helped me to reach here. I am safe because my car is bullet-proof. The TMC and it’s goons left no stone unturned to throttle democracy. But this Goondaraj will not stay. Lotus will also bloom here, starting from this place,” he told a BJP meeting.

The BJP chief claimed, “Mamataji’s misrule has lowered Bengal’s height. It has to be restored.

This is Diamond Harbour from where Jyotirmoyji, a known parliamentarian, once led. But the present MP is not visible in Parliament. It is a shame on democracy. Police and administration are getting politicised here. No administration exists here. It has collapsed. Without the Central force’s security, Bengal visit is a challenge.”

The West Bengal Police, however, stated, “J.P. Nadda, national president, BJP reached safely at the venue, Diamond Harbour, South 24 Pgs. Nothing happened to his convoy. Few bystanders at Debipur, Falta Police Station,  Diamond Harbour PD, sporadically and suddenly threw stones on the vehicles trailing along behind his convoy. Everyone is safe and situation is peaceful. Matter is being investigated to find out actual happenings.”

Senior TMC MP Sougata Roy wondered, “Why did the BJP need to pick Banerjee’s constituency with it’s national president’s visit? They could have planned only a meeting there. Anyway, it would have been better had stones and bricks were not pelted.”