Shah said that neither citizenship bill, nor triple talaq bill nor bill scrapping Article 370 are anti-Muslim. 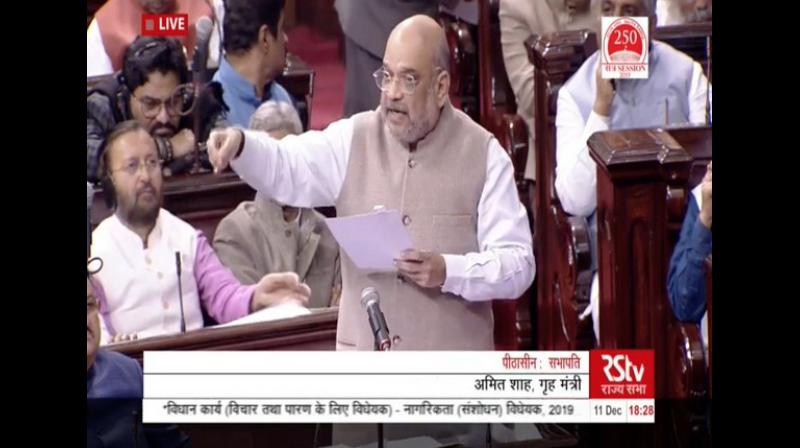 He said that the Bill has been brought to rectify a historic blunder -- the partition -- and give a dignified life to non-Muslims of Pakistan, Bangladesh and Afghanistan who fled religious persecution and settled in India before December 31, 2014. (Photo: ANI)

New Delhi: The Rajya Sabha on Wednesday passed the contentious Citizenship Bill after rejecting it to the select committee. The latest tally of votes being 117 votes in favour of the Bill and 92 against it.

Earlier in the day, Union Home Minister Amit Shah had tabled the bill saying that the bill provides 'hopes' for people who are not living with permanent residency in India.

Shah also attacked the Congress in Rajya Sabha, saying that the statements of Cong leaders and Pakistani leaders are the same.

He said that Rohingya would not be granted citizenship under the proposed Citizenship (Amendment) Bill as they did not come to India directly from Myanmar.

Replying to the debate on the Bill in the Rajya Sabha, Shah said that the Rohingyas first reached Bangladesh and then infiltrated into our country.

"It was asked that why were Rohingyas not included in the Bill? Rohingyas don't come to India directly. They go to Bangladesh and then infiltrate into India from there," he said.

He said that the Bill has been brought to rectify a historic blunder -- the partition -- and give a dignified life to non-Muslims of Pakistan, Bangladesh and Afghanistan who fled religious persecution and settled in India before December 31, 2014.

Shah said that the need to bring the Bill goes back to the partition and Pakistan's failure to protect its minorities.

"Despite Kabil Sibal and Anand Sharma's insistence, I would once again say that the partition happened on the basis of religion. It was a blunder, which forced me to introduce this Bill," he said.

Shah said, "There would have been no need to introduce this Bill. This Bill is to address the problem created by the partition.'' He further said that Muslims from other countries have right to apply for Indian citizenship and that it will be applicable in all states including West Bengal. ''No one will have to go to detention camp after passage of citizenship bill,'' he said.

Shah also said that Prime Minister Narendra Modi led BJP government is not there to only run the country but also set things right. Shah also assured that govt is committed to preserving language, culture of Assam.

Replying to Congress MPs P Chidambaram, Anand Sharma and Kapil Sibal's concerns, Shah said the Article 14 of the Constitution allows the Parliament to frame laws based on 'reasonable classification' which, he said, was in the Bill.

The Bill was passed in the Lok Sabha on Monday with a majority of 311 votes against 80 votes where 391 members were present and voting.

He further said that India can never be 'Muslim-mukt' (free from Muslims) while replying to a debate on the Citizenship (Amendment) Bill in the Rajya Sabha.

Replying to a statement of Congress MP Kapil Sibal, Shah said that Muslims should not fear the Bill as it does not strip them of their citizenship.

The Home Minister further said that the proposed legislation is not against the interest of Muslims. "How can the CAB be anti-Muslim? In this Bill, there is no proposal to touch the citizenship of any Muslim," he said.

''Also, if any government would have solved the problem, there would have been no need for this Bill," he added.

In the 245-member Rajya Sabha, the halfway mark was 121 as five seats were vacant bringing down the strength of the House to 240.

(with inputs from PTI and ANI)