'The Bill that you have brought is an assault on the very foundation of the Indian constitution,' Sharma added. 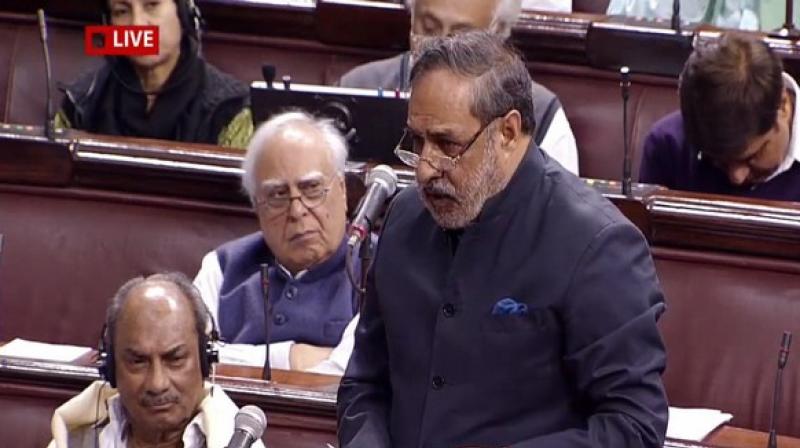 He said that several people from both East and West Pakistan had come to India and cited the examples of former prime ministers IK Gujral and Manmohan Singh. (Photo: ANI)

New Delhi: Congress leader Anand Sharma on Wednesday attacked the BJP, saying that the Citizenship Amendment Bill was an "assault" on the foundations of the Constitution and failed the morality test while asserting that it was wrong to blame his party for the Partition.

"The Bill that you have brought is an assault on the very foundation of the Indian constitution. It is an assault on the Republic of India. It hurts the soul of India. It is against our Constitution and democracy. It fails the morality test. It is divisive and discriminatory," Sharma said in the Rajya Sabha while participating in the Citizenship Amendment Bill debate.

He said that several people from both East and West Pakistan had come to India and cited the examples of former prime ministers IK Gujral and Manmohan Singh.

"Did people from East and West Pakistan not come and given shelter after Partition? Did they not get citizenship and live a dignified life? Two of our prime ministers came to India after Partition -- Dr Manmohan Singh and IK Gujral," Sharma outlined.

He said that Veer Savarkar had propagated the two-nation theory and said that the Citizenship Amendment Bill fails the constitutionality test.

"What was the role of the British? They gave veto power to the Muslim League and Jinnah. When the Second World War began, the Congress was banned and declared an illegal organisation. Thousands were jailed and Gandhiji gave the call of 'Quit India Movement'," he added.

Asserting that the Citizenship Amendment Bill was against the Preamble of the Constitution, Sharma urged the BJP to introspect in the wake of violent protests against the legislation in the North-East.

"I appeal to you to look at India, its society and its humanity through the spectacles of Mahatma Gandhi. Your Citizenship Amendment Bill clashes with that," Sharma said.

Taking a jibe at BJP, Sharma said that India's first Home Minister Sardar Patel will be "angry" with Prime Minister Narendra Modi if he had met him today.

"In our religion, we believe in rebirth and that we meet our elders. So if Sardar Patel meets Modi Ji then he will be very angry with him. Gandhiji will, of course, be sad, but Patel will be indeed very angry," he further said.

The Bill seeks to grant Indian citizenship to refugees from Hindu, Christian, Sikh, Buddhist and Zoroastrian communities fleeing religious persecution from Pakistan, Afghanistan, and Bangladesh who entered India on or before December 31, 2014.

Opposition parties including Congress, NCP, TMC and DMK are protesting against the Bill, which was passed by Lok Sabha on Monday with a majority of 311 votes against 80 in the Lower House, where 391 members were present and voting.