4 CRPF personnel, including two sub-inspectors, were killed and another injured in a gunfire allegedly opened on them by Yadav. 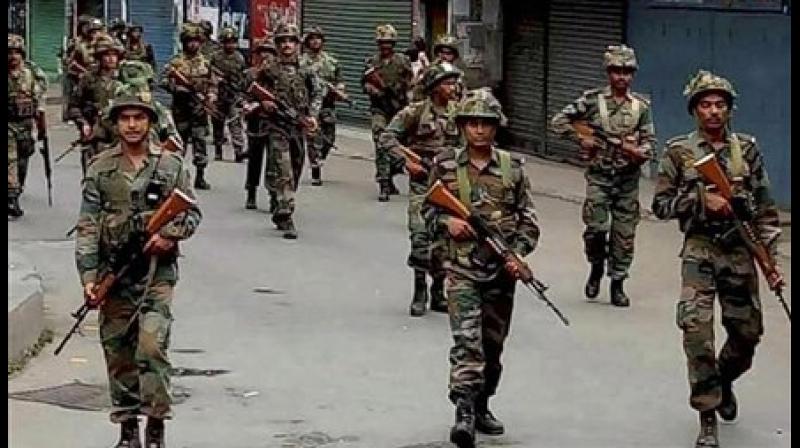 A senior police official said that the preliminary investigation suggested that it was a 'well calculated' attack by Yadav on his colleagues. (Representational Image)

Raipur: CRPF constable Sant Kumar Yadav, accused of shooting dead his four colleagues at a camp in Chhattisgarh's Bijapur district on Monday said he was being framed in the case, a claim dismissed by an official who called it a "well calculated" killing.

Yadav (35) was on Monday produced in a Bijapur court which sent him to judicial remand for two weeks, police said.

Four Central Reserve Police Force (CRPF) personnel, including two sub-inspectors, were killed and another injured on Sunday in a gunfire allegedly opened on them by Yadav at the force's 168th battalion 'G' company camp in Basaguda, located around 450 km from here.

Yadav told the press on the court premises on Monday that he was not involved in the fratricide.

"I completed my duty from 2 to 4 PM on Saturday and then went to get fresh. Around 5 PM, I heard the sound of bullets and ran towards the place. I immediately took position with my weapon like other personnel were doing. Who opened firing and on whom, I don't have any details," he claimed.

Yadav, a native of Firozabad in Uttar Pradesh, said the company commander and other troopers held him after the firing saying he had killed the four personnel.

"I came to know that they were killed by a different weapon not by mine. I don't know why I am being implicated when I haven't done anything," he said.

When asked why he was being dragged into the incident without any reason, Yadav said, "Small issues and disputes can be there (among personnel) if we work together but it doesn't mean that anybody will take such an extreme step. I have come here to earn for my family and they also for the same."

Meanwhile, a senior police official posted in Bijapur said, the preliminary investigation suggested that it was a "well calculated" attack by Yadav on his colleagues.

"After the incident, Yadav surrendered before his company commander and confessed to having committed the crime.

However, he retracted his statement this morning," the official who questioned Yadav in the custody said.

As per preliminary probe, Yadav was a habitual drinker and used to visit nearby villages in the insurgency-hit forest without informing anyone in the camp in search of locally-made liquor, he said.

Yadav, who was earlier posted in the outpost of the CRPF's 168th battalion located close to the main camp of the unit in Basaguda, was shifted to the main camp recently after a complaint was lodged against him in connection with his habits, he said.

The constable also had some issues with the deceased personnel and had altercation with them in the past, according to the official.

"After completing his duty yesterday, Yadav went to the officers' mess, picked up a weapon of one of his colleagues and sprayed bullets which shows that it was a well-calculated attack as he did not use his weapon," he claimed.

He said the casualties would have been more had some personnel not gone out on some duty at the time of the incident.

The deceased included sub-inspectors Vikey Sharma (34) and Megh Singh (52), who hailed from Samba district of Jammu and Kashmir and Ahmedabad in Gujrat, respectively.

The other two deceased are Assistant Sub-Inspector Rajveer Singh (48), who hailed from Jhunjhunu in Rajasthan, and Constable G Sankara Rao (37) from Vijaynagram in Andhra Pradesh.

ASI Gajanand (49), a native of Rewari in Haryana, sustained injuries in his side ribs and is undergoing treatment at a hospital in Raipur.