When asked about the depleting strength of jets, he said besides Rafale, India is going to produce Tejas in large numbers. 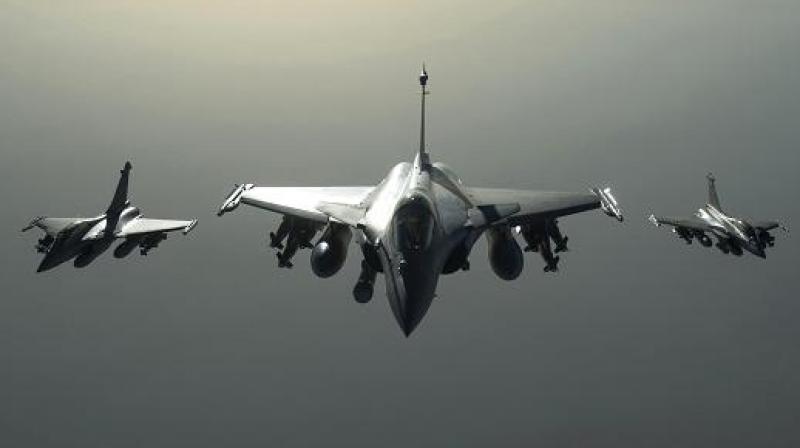 India will get the first tranche of Rafale fighter jets from France in the next three years, Indian Air Force chief Arup Raha said on Saturday. (Photo: AP/File)

Kolkata: India will get the first tranche of Rafale fighter jets from France in the next three years, Indian Air Force chief Arup Raha said on Saturday.

"Rafale contract caters for delivery time between 36 months to about 66 months if I am not wrong. So within three years' time we will have the first few aircraft delivered to us and within five and a half years we will have two full squadron of aircraft in operation," Air Force Chief Raha said at a function in Kolkata.

He said the fighter jets, capable of carrying nuclear weapons and equipped with latest missiles, will tremendously increase the force's capability.

When asked about the depleting strength of jets, he said besides Rafale, India is going to produce Light Combat Aircraft (LCA) Tejas in large numbers.

"The effort is on to increase production lines. The more the number of aircraft we produce, the faster we ramp up the capacity to close the gap created by obsolete and old aircraft," Air Force Chief Raha said.

IAF has put on display one such obsolete MiG-27 fighter aircraft in front of the Netaji Subhas Chandra Bose International Airport in Kolkata. The installation was inaugurated by the Air Chief Marshal.

He also said the government is also thinking of procuring another fighter aircraft to fill up the gaps faster.

On the Indo-Russian fifth generation fighter aircraft (FGFA), Raha said they are already working with Russia on research and development.

"The project is already negotiated. Preliminary design on our part is over and if this R&D negotiations are over and we sign the contract then we should have these aircraft in another 5-6 years," Air Force Chief Raha said.