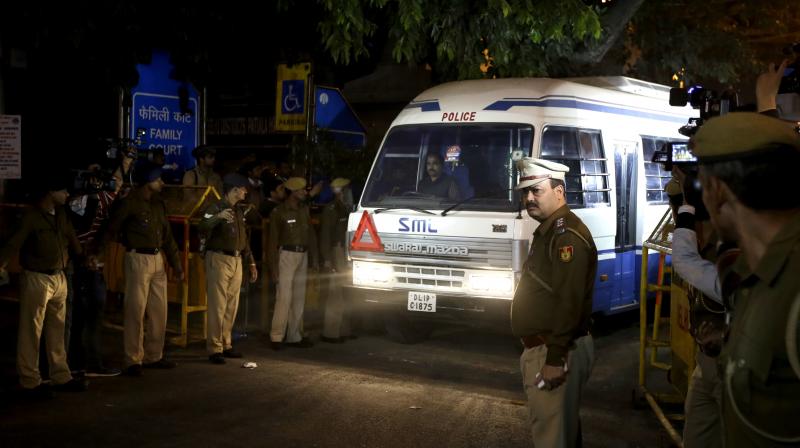 CBI vehicle carrying Former Air Force chief S.P. Tyagi comes after he along with other accused were produced in a Delhi court in New Delhi. (Photo: PTI)

New Delhi: Former Air Force chief S.P. Tyagi was remanded to four days CBI custody by a Delhi court on Saturday in connection with Rs 3,600crore Augusta Westland chopper deal after the investigating agency said he was needed to be quizzed to unearth a very large conspiracy having international ramifications.

The court also sent his cousin Sanjeev Tyagi alias Julie and advocate Gautam Khaitan, also accused in the case, to a CBI custody till December 14.

Metropolitan magistrate Sujit Saurabh remanded the accused to the CBI custody, saying their custodial interrogation was required for a fair probe. During the proceedings, the CBI had sought 10-day custody, arguing that it was a huge conspiracy having international ramifications. The counsel appearing for the accused, however, opposed the CBI’s plea, saying the FIR was registered over three years ago, and there was no fresh ground for the arrests now.

The CBI alleged that Mr Khaitan was the ‘brain’ behind how the bribe money reached India and several companies, through which the money travelled came into existence. While seeking their custodial interrogation, the CBI said the accused were required to be confronted and their assistance was needed to collect evidence and details of the bribe amount paid by AgustaWestland through different back channels abroad. The agency argued said they were required to be interrogated and confronted with each other and the incriminating evidences. It also alleged that Mr Tyagi had “abused his official position, and when he was the Air Chief Marshal, he had made huge investments in land and other (properties) and he had not disclosed the source of his income.”

It also said the involvement of several others in the entire conspiracy can’t be ruled out.