'Rs 3 lakh aid will be given to each families,' the ruling AIADMK said. 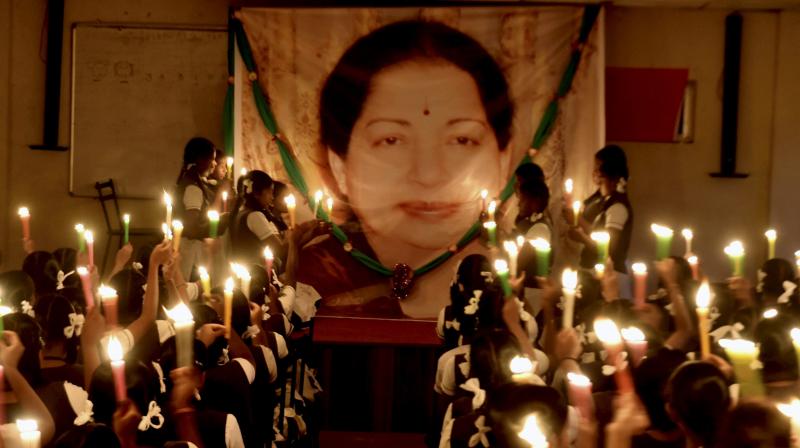 The ruling AIADMK on Sunday said that a total of 470 people have died so far of grief and shock. (Photo: PTI/File)

Chennai: The ruling All India Anna Dravida Munnetra Kazhagam (AIADMK) on Sunday said that a total of 470 people have died so far of grief and shock following the death of former chief minister J. Jayalalithaa.

"Total 470 people died, unable to bear death of Puratchi Thalaivi Amma, Rs. 3 lakh aid will be given to each families," the AIADMK tweeted.

Earlier, the party had announced Rs. 50,000 for a party functionary, who allegedly attempted self-immolation and a similar amount to another person, who chopped his finger following Jayalalithaas's demise on December 5.

The AIADMK had released a list on Saturday as well, claiming that a total of 280 died due to “shock” over the demise of Jayalalithaa.

The party headquarters had released the list containing the names of 203 such deceased persons from different parts of the state, including Chennai, Vellore, Tiruvallore, Tiruvannamalai, Cuddalore, Krishnagiri, Erode and Tirupur districts.

The party condoled their death and announced a welfare fund of Rs 3 lakh each to families of the deceased.

Earlier, the party had said that 77 persons had died of shock and grief following her death and announced a similar sum as relief to the dead persons’ families. The number of people having died of shock over Jayalalithaa’s death stands at 280 now. Hospitalised on September 22 and having suffered a cardiac arrest on December 4, she passed away the next day.