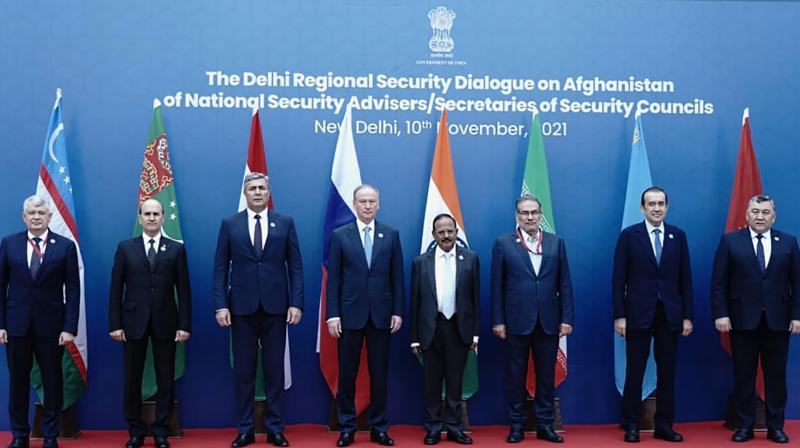 New Delhi: In what is seen as a clear message to the ruling Taliban regime in Kabul and its main backer Pakistan, the participating countries at the NSA-level conference hosted by India on the situation in Afghanistan on Wednesday, that also comprised Russia, Iran and the five Central Asian republics, “emphasised that Afghanistan’s territory should not be used for sheltering, training, planning or financing any terrorist acts” and that the strife-torn nation should “never become a safe haven for global terrorism” while calling for a “collective cooperation against the menace of radicalisation, extremism, separatism and drug trafficking in the region”.

They also “expressed concern over the deteriorating socio-economic and humanitarian situation in Afghanistan, and underlined the need to provide urgent humanitarian assistance to the people of Afghanistan” while “reiterating that humanitarian assistance should be provided in an unimpeded, direct and assured manner to Afghanistan and that the assistance is distributed within the country in a non-discriminatory manner across all sections of the Afghan society”. This too is seen as a major acceptance of New Delhi’s concerns.

In the “Delhi Declaration” adopted at the “Third Regional Security Dialogue on Afghanistan”, national security adviser Ajit Doval, who chaired the meeting, and his counterparts also “stressed the necessity of forming an open and truly inclusive government that represents the will of all the people of Afghanistan and has representation from all sections of their society, including major ethno-political forces in the country,” adding that the “inclusion of all sections of society in the administrative and political structure is imperative for the successful national reconciliation process in the country”. This is seen as criticism of the almost exclusive Pashtun composition of the Taliban regime in Kabul that leaves out the minority Tajiks and Uzbeks, besides the Shia Hazaras.

Expressing immense satisfaction, government sources late Wednesday evening said the NSA-level Regional Security Dialogue on Afghanistan held here earlier in the day had “exceeded” India’s expectations and that the NSAs of eight countries -- India, Russia, Iran and five Central Asian republics -- had “easily arrived at a complete consensus” that enabled the issuing of the Delhi Declaration in the afternoon itself. Sources also said “there was extraordinary degree of convergence on the assessments of the situation in Afghanistan and the principal challenges in Afghanistan and the region (and that) these included the security situation, heightened risk of terrorism and the impending humanitarian crisis”.

The sources said the NSAs “noted the need to provide humanitarian assistance and emphasised that the land and air routes should be made available and no one should impede the process”. These views are being viewed as a snub to Pakistan, that is seen to have blocked India’s access to Afghanistan through the land route passing through its territory.

The sources also said the NSAs had a “substantive exchange” of views with Prime Minister Narendra Modi too when they called on him after the conference. They said Mr Modi “shared India’s perspective on Afghanistan” with the NSAs.

The participating nations in the Delhi Declaration also “emphasised the importance of ensuring that the fundamental rights of women, children and minority communities are not violated” while “noting the United Nations has a central role to play in Afghanistan and that its continued presence in the country must be preserved”. It may be noted that while Pakistan boycotted the conference, its all-weather friend and benefactor China too decided to skip the meet, citing “scheduling difficulties”.

In his opening remarks, Mr Doval said: “We are meeting today to discuss matters related to Afghanistan. We all have been keenly watching the developments in that country. These have important implications not only for the people of Afghanistan, but also for its neighbours and the region.”

At the conference, Iran referred to the problems facing Afghanistan such as terrorism and poverty and said the “solution is inclusive government with participation of all ethnic groups”. Afghanistan’s other neighbour Tajikistan said the “situation on the Tajik-Afghan border still remained complicated” and that “Afghanistan may face a real humanitarian catastrophe”. Kazakhstan said it was concerned about terrorism, extremism and the spectre of Central Asian radicalised fighters.

India’s time-tested friend Russia said there should be practical measures to counter threats emanating from Afghan territory and hoped in future “other relevant regional” issues would also be on the agenda. Moscow said “different formats of dialogue” on Afghanistan must complement each other and not duplicate work. Uzbekistan, the Kyrgyz Republic and Turkmenistan were the other countries that were at the conference.

At the conference, the sources said, all the NSAs stressed no one should boycott the process due to bilateral agendas. The NSAs also had a very substantive exchange during their call on the PM.

Later on Wednesday, Mr Doval held bilateral meetings with the NSAs of Russia, Kazakhstan and Iran. They had detailed discussions both on Afghanistan as well as other bilateral issues. With Kazakhstan, besides Afghanistan, there were discussions on enhancing connectivity and trading routes between the two countries, and practical steps to be taken in this direction. During the meeting with Iran, bilateral trade and the current state of relations were discussed, besides Afghanistan. Iran had earlier hosted the previous two meetings of this format, and discussions on how to carry forward this process also took place. It may be noted that Mr Doval had held bilateral meetings with the Tajik and Uzbek NSAs earlier on Tuesday.