India   All India  11 Nov 2019  Which of the five judges authored historic verdict?
India, All India

Which of the five judges authored historic verdict?

Coupled with this, a game of guess is making round as to which judge is the author of the 116-page addendum at the end of the judgment. 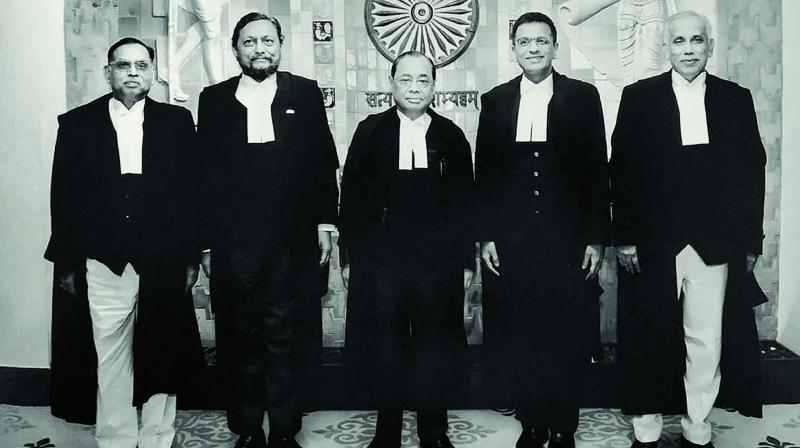 New Delhi: A day after the Ayodhya judgment was pronounced, legal circles are agog with speculation as to “who is the author” of the 929-page unanimous verdict by the five-judge Constitution Bench which gave the disputed site for the construction of Lord Ram’s temple and rejected the Sunni Central Waqf Board’s claim to the title of the 2.77 acres of the disputed site. Of the 2.77 acres, the core area is 1,500-sq-yard.

The question which is doing the rounds is who among the five judges — Chief Justice Ranjan Gogoi, Chief Justice designate Justice S.A.Bobde, Justice D.Y.Chandrachud, Justice Ashok Bhushan and Justice S. Abdul Nazeer — is the author of the 929-page judgment that was pronounced by CJI Gogoi on Saturday.

Coupled with this, a game of guess is making round as to which judge is the author of the 116-page addendum at the end of the judgment.

None in the legal fraternity could recall a similar instance where an important judgment — though none could be as important as one on Ayodhya — being pronounced without disclosing the name of the judge who authored it.

Analysing the style of writing the judgment by the five judges, each one of them have authored a large number of judgments, it is being ventured that the format of the Ayodhya judgment could be traced to Justice Chandrchud.

It is being pointed out that the style of Ayodhya judgment starting with the index, having the table of contents, could be traced to Justice Chandrachud’s style of writing judgment.

At times former Chief Justice Dipak Misra, too, used this format of writing judgments starting with table of contents.

The identity of the judge who wrote the 116-page addendum, too, could be traced from the font that has been used while writing it.

From this font one can trace to some of the divergent or concurring views expressed by the said judge in earlier judgments. It appears that he is not one of the first three judges on the five-judge Constitution Bench that had pronounced the Ayodhya judgment.

The SC on Saturday paved the way for the construction of a Ram temple at the disputed site, while directing the Centre to allot a 5-acre plot to the Sunni Waqf Board for building a mosque.