According to sources, the religious leaders pledged unstinted support to the government in all steps to maintain peace and order. 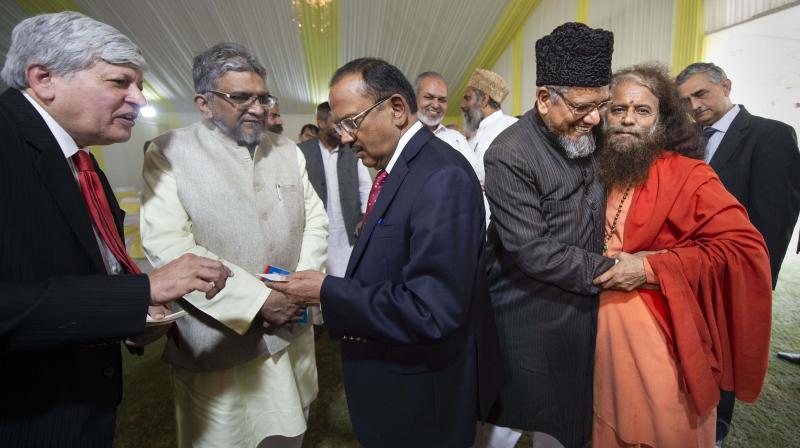 NSA Ajit Doval interacts with religious leaders during an inter-religious faith meeting at his residence in New Delhi on Sunday. (Photo: PTI)

According to sources, the religious leaders pledged unstinted support to the government in all steps to maintain peace and order. They appealed for maintaining peace and tranquillity amidst apprehensions that some anti-national elements may try to “exploit the situation”.

“Those attending the meeting were alive to the fact that certain anti-national and hostile elements, both within and outside the country, may attempt to exploit the situation to harm our national interest,” according to a joint statement issued after the four-hour meeting at Mr Doval’s residence. Those religious leaders, who attended the meeting include Baba Ramd-ev, Maulana M. Madani and Avdheshanand Giri.

Earlier on Saturday, Ajit Doval met Avdheshanand Giri, Swami Parmatmanand and Baba Ramdev at his residence for the meeting that lasted for almost an hour. Avdheshanand Giri is the chairman of the Hindu Dharma Acharya Sabha.

Swami Parmatmanand is considered to be close to Prime Minister Narendra Modi. Avdheshanand Giri and Parmatmanand, after meeting NSA Ajit Doval, said that they had discussed the situation post the verdict.

“The verdict should not be seen as victory or defeat of one or the other, it is a verdict in favour of the nation. Everybody should respect it,” they said on Saturday.

The Supreme Court in its verdict on Saturday backed the construction of a Ram temple by a government trust at the disputed site in Ayodhya and ruled that an alternative five-acre plot must be found for a mosque in the Hindu holy town. Delivering a unanimous verdict on a case that has long polarised the country and frayed the secular tapestry of Indian society, a five-judge bench of the apex court headed by Chief Justice of India Ranjan Gogoi said the faith of Hindus that Lord Ram was born at the site was undisputed and he is symbolically the owner of the land.