The date of polling has been set for Dec 5, while counting of votes is scheduled to begin on Nov 9. 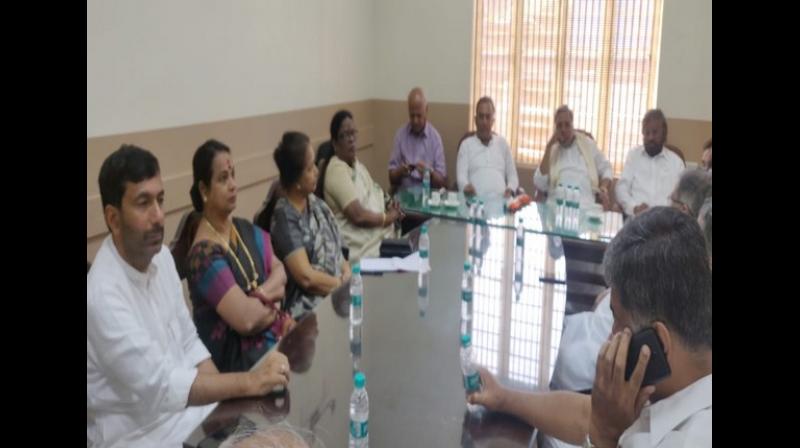 Bengaluru: In the wake of the upcoming by-elections in Karnataka, Congress leaders on Monday held a meeting here to discuss strategy and candidates for the respective seats.

"We are ready to fight the by-polls. We have made all the arrangements. We have shortlisted the names of the probable candidates from the Congress party and those who defected from Congress party will be taught a lesson this time," Khandre told ANI here.

"Nothing is good in the BJP. They are not moving forward on what they had promised. The way they have formed the government here, even the people are against them," he added.

According to sources, Hariprasad, Rahman Khan and Muniyappa left KPCC office in between the meeting as they were not happy with Siddaramaiah's attitude about his proposal to allot tickets to only his supporters.

However, Dinesh Gundu Rao denied the reports and said, "It was a collective discussion. There was no walkout. There is unnecessary speculation in media. Everything was discussed in a very good manner. After the meeting was concluded, they left."

Asked how confident he is in the disqualification case of 17 Congress and JDS MLAs, Rao said, "I am 100 per cent sure that the judgement will go in our favour."

He further said, "Many people of the BJP are fed up of the present BJP government including their sitting MLAs... I think the Chief Minister has not been able to focus on anything - governance or issues. He is more interested in by-election, he is more interested in saving his own chair. Support is not there from his own party... Simply they are making announcements and doing programs just for the sake of by-elections. I think once the by-elections are over, then all these things will not even be implemented. So, to win the by-elections, they are focussing on these constituencies. This is a very gross misuse of government machinery."

He said that the BS Yediyurappa-led government is "very weak".

"It's a directionless government, aimless government -- no vision, nothing for the state, they have failed on the flood situation, there is no administration. The coalition government was far superior to this BJP government," Rao said.

The date for filing nominations for the by-elections to the 15 Assembly seats in Karnataka are from November 11-18, said Chief Electoral Officer (CEO) of the state, Sanjeev Kumar, on Sunday.

The date of polling has been set for December 5, while the counting of votes is scheduled to begin on November 9, Kumar said.

According to Kumar, more than 37 lakh 50 thousand voters will decide the fate of candidates in the upcoming by-polls, including 19.12 lakh male voters and 18.37 lakh female voters while 399 come under the others category.

The CEO added that a total of 4185 polling booths will be set up for the by-elections and a total of 22,958 polling personnel will be required for the smooth conduct of the elections which will be done using Electronic Voting Machines (EVMs) and voter-verified paper audit trail (VVPATs).

The elections to the 15 Assembly seats were earlier slated for October 21 but later postponed to December 5 by the Election Commission (EC) as the case pertaining to the disqualification of 17 MLAs was pending in the Supreme Court.

The judgement on their disqualification was reserved by the apex court last month.