Thousands of families, especially women, are involved in making the prayer beads. 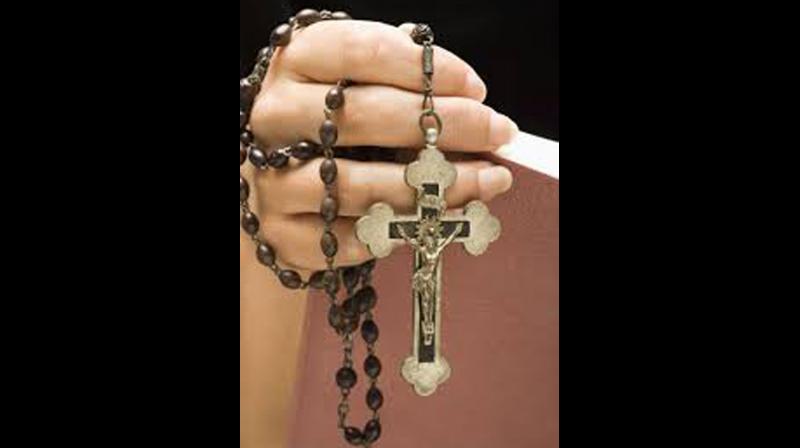 KOCHI: COVID-19 has struck deep into various sectors and cottage industries are no exception. Cottage industries like the handmade rosaries’ units, which are unique to couple of villages in Kerala, are struggling to tide over the unprecedented crisis.

Several families in Koonammavu, few kilometres away from Kochi, known as the rosary village of Kerala, have been struggling as their means of livelihood -- making of prayer beads -- has come to a total standstill.

The village has been sending prayer beads to many countries. Thousands of families, especially women, are involved in this industry. The business runs without any support from the government is one of the major means of livelihood in many villages in the area.

“Currently, the industry is totally shut with no production and no sales. The beads, thread and other raw materials are mainly imported from China. With the pandemic outbreak, raw materials are not being imported. The big stock of rosaries and pendants collected from household units are stuck with us. We have no idea when the sales can be resumed. Since the products could not be sold, we had to borrow money to pay for the workers,” said Mathews, an entrepreneur.

In the village, there are nearly 20 large scale entrepreneurs who have employed at least 100 families in making the sacred prayer beads. In addition, there are several small scale businessmen.

There are different types of rosaries and the class and price of products are based on the raw materials.

“On an average, rosaries and goods for religious purpose worth Rs.50 lakhs are being sent to various parts of the world from this small village alone. The total annual turnover will be several crores. The large scale entrepreneurs will collect the finished products and will hand it over to exporters in Chennai and Mumbai who will ship it across the world. Closure of churches, retreat centres and such institutions across the world on account of the pandemic has adversely affected the entire sector,” added Mathews.

The industry, which dates back to more than 150 years, has been one of the major backbones of the village’s economy. From young girls to octogenarians, women are majorly involved in the intricate and meticulous craft of making rosaries and other materials of religious use.

“From Rs 1.50 to Rs  8.00, the rate for making a piece of prayer beads varies according to the raw materials and the pattern in which they are made. From normal thread rosary to intricate patterns, different types of prayer beads are made here. The beads will be wooden, pearls or even crystals,” said Jessy, a housewife who has been employed in the sector for several years.

Apart from items of religious use for Christians, the villagers started making pendants and garlands for Hindus to expand the business. Now, the pandemic has shattered the dreams of the villagers, for whom prayer beads were symbols of good fortune.