Journalists were miffed after Kageri took the memorandum and left the chamber without listening to their grievances, sources said. 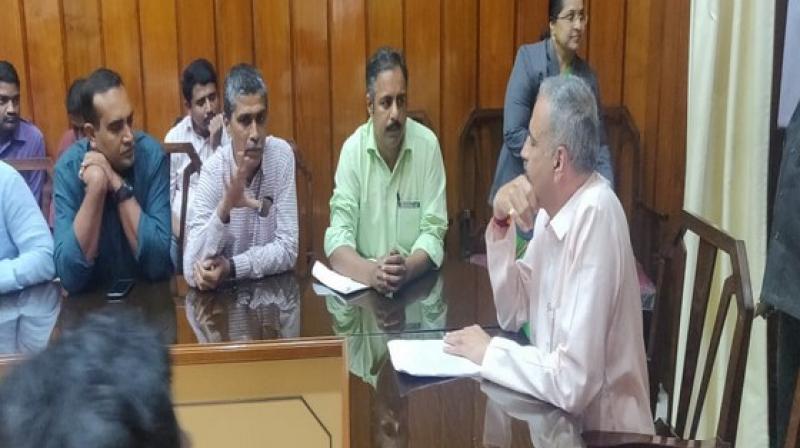 Hence, the scribes decided to stage a protest against the Speaker. (Photo: ANI)

Scribes from Kannada news channels and national media representatives met Kageri at his chamber in Vidhana Soudha on Thursday and submitted a memorandum asking the Speaker to take back his decision.

However, Kageri stood his stand, reiterating that restrictions were imposed in accordance with rules.

Sources said that Kageri was following the directions given by BJP leaders to not allow media to telecast the House proceedings. They also said that the decision will not allow people to watch what their representatives are doing inside the assembly.

Journalists were miffed after Kageri took the memorandum and left the chamber without listening to their grievances, sources said.

Hence, the scribes decided to stage a protest against the Speaker.

The previous Congress-JD(S) coalition government had initiated a move to restrict media from entering the House. However, this was criticised by many people, including the BJP.

Earlier, Kageri said that the ban was for three days only on a trial basis. "We are following the rules. We have taken this decision to ban media for 3 days on a trial basis," he told reporters here.

The three-day winter session of the Karnataka Assembly commenced on Thursday.

Earlier in the day, Chief Minister B S Yediyurappa had said that he would request Kageri to reconsider his decision on barring media from telecasting the house proceedings.

"My government is always committed to freedom of media. I will make a sincere effort and request speaker Vishweshwara Hegde Kageri to reconsider his decision on barring media from telecasting the house proceedings," tweeted Chief Minister's Office, Karnataka.

As per the order, only Doordarshan cameras are allowed inside the Legislative Assembly.