While Dr Jaishankar said Afghan was a major subject of discussion, Ms Payne said future of Afghanistan remains a center of concern for all 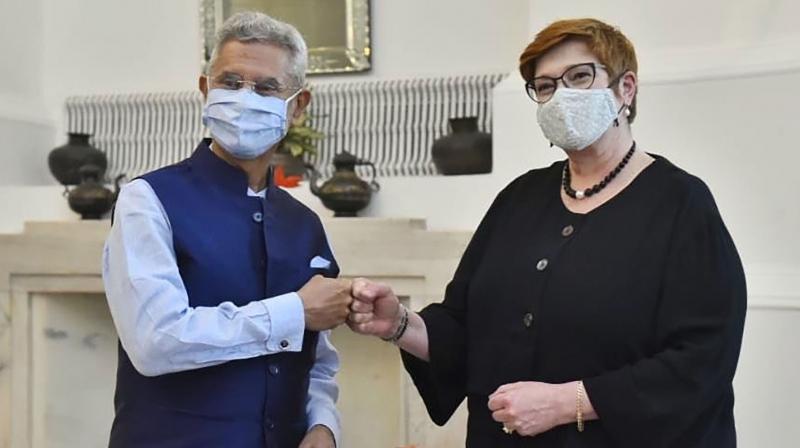 New Delhi: The situation in Afghanistan and the terror threats from there figured prominently in the first India-Australia “2+2 talks” here on Saturday. In the discussions that external affairs minister S. Jaishankar and defence minister Rajnath Singh had with Australia’s Marise Payne and Peter Dutton, their respective counterparts, both sides said Afghanistan must not allow its soil to be used for terrorism and it should never again become a safe haven for the “breeding and training” of terrorists.

The discussions also covered the humanitarian crisis and the treatment of women and minorities Afghanistan is facing since the Taliban took control in Kabul. The dialogue coincided with the 20th anniversary of the 9/11 terror attacks in the United States.

Mr Jaishankar said Afghanistan was a “major subject of discussion”, while Ms Payne said “the future of Afghanistan remains a concern” for all. “During the dialogue, we also exchanged views on developments in our neighbouring regions. Afghanistan was, understandably, a major subject of discussion. We agreed the international community must be united in its approach, guided by UNSC Resolution 2593… Today is the 20th anniversary of 9/11. It is a reminder -- if one is still needed -- of the importance of combating terrorism without compromise. Close as we are to its epicentre, let us appreciate the value of international cooperation,” Mr Jaishankar said.

Mr Jaishankar said there are concerns over the composition of the interim Taliban Cabinet and the treatment of women and minorities in Afghanistan. “Apart from terrorism, there were issues of concerns about the inclusiveness of the dispensation, concerns about the treatment of women and minorities, matters related to travel of Afghans, issues relating to humanitarian assistance. It is an evolving situation, and it was a good exchange of notes,” he said.

Ms Payne said Australia has a strong interest in ensuring Afghanistan does not again become a “safe haven for the breeding or training of terrorists”. She added: “We are very conscious about the impact of violence and breaches of human rights of the Afghan community and would call for fundamental human rights to be observed.”

At the talks, the two sides also deliberated on the situation in the Indo-Pacific, South China Sea, ways to further deepen bilateral defence and trade cooperation and to effectively deal with the challenges of tackling the Covid-19 pandemic.

Mr Jaishankar specifically took up with Ms Payne the problems faced by Indian students in Australia and those wishing to go to Australia as well as the Indian origin community living there. “I urged that the difficulties faced by students due to travel restrictions be sympathetically addressed as soon as possible,” he said.

Elaborating on his discussions with Australian defence minister Peter Dutton, Mr Rajnath Singh said both sides had in-depth discussions on bilateral and regional issues that covered maritime security in the Indo-Pacific, and cooperation in multilateral formats, ensuring free flow of trade, adherence to international rules and sustainable economic growth in entire region. He invited Australia to engage in India’s growing defence industry.

“On bilateral defence cooperation we decided to expand military engagements across services, facilitate greater defence information sharing and to work closely for mutual logistic support. In the context of defence cooperation, both sides were glad to note Australia’s continued participation in the Malabar Exercises. We invited Australia to engage India’s growing defence industry and to collaborate in co-production and co-development of defence equipment,” Mr Singh said.