Vokkaliga and Lingayat are the two dominant communities of Karnataka. 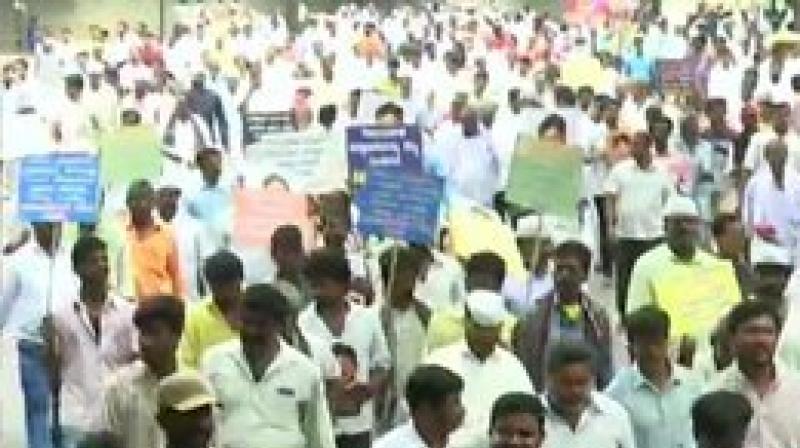 The protesters poured into the city from different parts of the State, particularly the Vokkaliga stronghold of Old Mysuru region, in respose to "Raj Bhavan Chalo" call given by various outfits of the community. (Photo: ANI)

Bengaluru: Thousands of people belonging to the Vokkaliga community took out a protest rally here on Wednesday against the arrest of senior Congress leader D K Shivakumar and to express solidarity with him as the issue appeared to take a caste colour.

The protesters poured into the city from different parts of the State, particularly the Vokkaliga stronghold of Old Mysuru region, in respose to "Raj Bhavan Chalo" call given by various outfits of the community.

Vokkaliga and Lingayat are the two dominant communities of Karnataka.

Shivakumar, an influential Congress leader of Karnataka and a former Minister, was arrested on September 3 by the Enforcement Directorate in a case of alleged money laundering and has been in the custody of the agency since then.

The protest march from National College grounds to Freedom Park and then to the Raj Bhavan was backed by the opposition Congress and the JDS.

Thousands of policemen had been deployed all along the route to ensure law and order.

Anticipating a huge turnout, police had diverted traffic which was however thrown out of gear leading to snarls in parts of the city.

The ED has summoned Shivakumar's daughter Aishwarya in connection with its probe against the former Minister.

She has been asked to depose before the investigating officer of the case on September 12.

It is expected that her statement would be recorded under the Prevention of Money Laundering Act and questioned over aspects including Shivakumar's trip to Singapore in 2017 vis-a-vis money laundering allegations.

The ED had in September last year registered a money laundering case against Shivakumar, Haumanthaiah, an employee at Karnataka Bhavan in New Delhi, and others.

This criminal case was based on an Income-tax department charge sheet filed against Shivakumar and others before a court in Bengaluru for alleged tax evasion and hawala dealings.

Accusing the BJP government of indulging in "vendetta politics", Shivakumar had on Tuesday exuded confidence that he will emerge "victorious" both legally and politically.

He also thanked party leaders and supporters for standing behind him and urged them to hold a peaceful protest here on Wednesday and not cause any inconvenience to common people.

"I would like to reiterate that I have done nothing wrong & am a target of vendetta politics. With the support and blessings that I am receiving from all of you, and my belief in God and our judiciary, I have full faith that I will emerge victorious both legally and politically (sic)," a tweet from Shivakumar's Twitter handle read.