A strike called by an alliance of key separatist leaders against the minister’s visit disrupted normal life in the Valley. 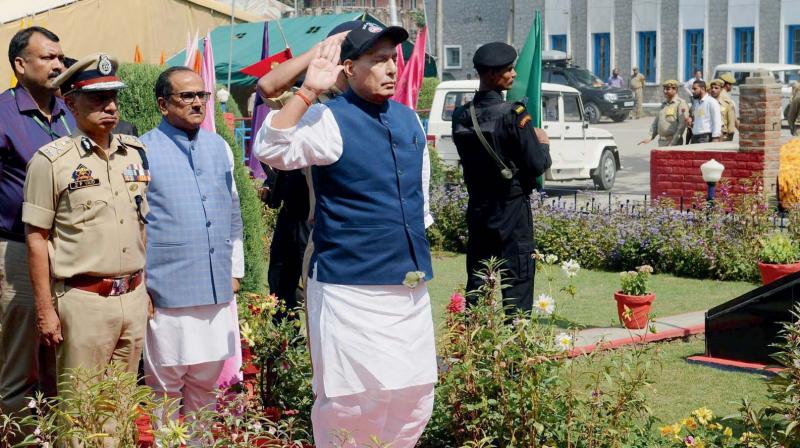 Srinagar: Union home minister Rajnath Singh on Sunday pledged the Centre’s full support to the Jammu and Kashmir police and Central Reserve Police Force, that have suffered significant casualties from rising terror attacks in recent weeks, as well as administrative and logistics assistance they need. “I don’t have words to praise your bravery. Even the Prime Minister has praised your courage,” he said at a meeting with J&K policemen at the district police lines in southern Anantnag on Sunday, the second day of his J&K visit.

Later, interacting with their counterparts from the CRPF at its 90 Battalion headquarters in the town, the home minister said the country was equally proud of the paramilitary personnel. In a tweet, he reiterated it by saying: “We are proud of our CRPF personnel. Courage cannot be purchased from any market. You are born with unassailable & unmatched courage.”

Acknowledging that the J&K police personnel were working in difficult and life-threatening situations, the home minister said orders were issued for bulletproof vehicles at all police stations in the state and jawans too would be provided with bulletproof jackets. “You are working in extremely challenging conditions,” he said, saying funds for purchasing bulletproof jackets and vehicles, and for setting up a trauma centre for J&K police personnel had been released.

During a series of meetings with the state’s political leaders, Mr Rajnath Singh reiterated that he was willing to hold discussions with anyone with an open heart to bring peace to Kashmir. He also appealed to people to come forward for discussion if they have any complaints or qualms. He said: “I appeal to everyone to come forward to have a discussion. If you have any complaints or qualms, I am ready to have talks with an open heart.”

Anantnag, with three other south Kashmir districts — Kulgam, Shopian and Pulwama — have seen the most number of militancy-related incidents and violence compared to the rest of the Valley in the past couple of years. Both the J&K police and the CRPF have been at the receiving end, and it was for that reason that the home minister, now on a four-day visit to Kashmir, chose to reach out their officers and jawans in Anantnag.

On Saturday itself, soon after the home minister’s arrival in Srinagar, a J&K policeman, Imtiyaz Ahmed, was killed and his colleague Shakeel Ahmed critically injured in a militant attack at Anantnag’s bus terminus.

A strike called by an alliance of key separatist leaders against the minister’s visit disrupted normal life in the Valley. In Srinagar, the J&K police and paramilitary forces continued to enforce a security lockdown in six police station areas. An official spokesman said that restrictions under Section 144 CrPC remained in force in Nowhatta, Maharaj Gunj, Rainawari, Khanyar, Safakadal, and Maisuma areas “as a precautionary measure to avoid any untoward incident”.

However, the home minister, at his interaction with the J&K police and the CRPF, hoped “Kashmir will be free from terror ... and no force in the world will be able to stop it from becoming a heaven again”.

On the occasion, he remembered ASI Abdur Rasheed and Imtiyaz Ahmed, saying their supreme sacrifices were made for J&K. He said: “I’ve seen the picture of martyred ASI Abdul Rashid’s daughter. I saw her face drenched with tears. It is difficult to forget that picture.”

Speaking at the Sainik Sammelan at the CRPF base, the minister said its men were born with “unassailable and unmatched courage”. He said it was his aim to provide, at least, `1 crore to the family of a martyr from the Central paramilitary forces.

The home minister also had meeting with leaders and representatives of various political, social and trade organisations to know their views on the issues confronting the state. An official release said the delegations which called on him “to apprise him of the prevailing situation in the state and the way forward” included those of coalition partners PDP and BJP, the National Conference, Congress, the Peoples’ Conference headed by Sajjad Gani Lone, who is also a minister in the state government, the Peoples’  Democratic From, Democratic Party (Nationalist), Awami  Itehaad Party, Kashmir Society, National Panthers’ Party, All J&K Panchayat Association, All Party Sikh Coordination Committee and ABVP.