The BSP will contest on 50 seats while the JJP on 40 in the 90 member state assembly polls due later this year. 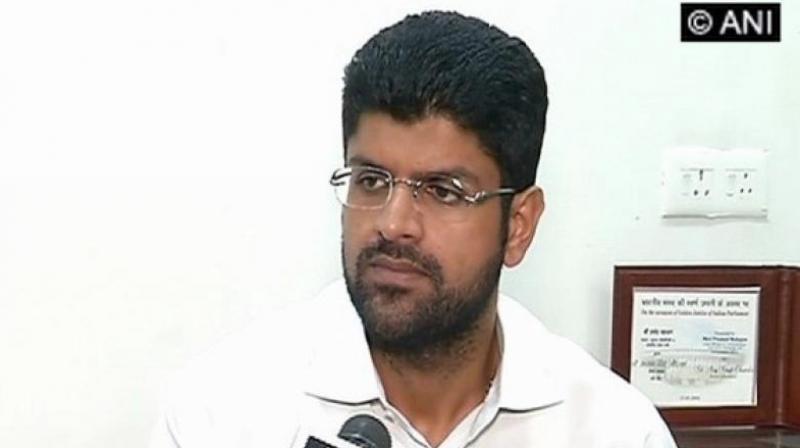 'After several meetings of top leaders of both parties, it was decided that JJP and BSP will contest next Haryana Assembly elections in alliance,' Chautala said. (Photo: File/ ANI)

New Delhi: The Jannayak Janata Party (JJP) and Bahujan Samaj Party (BSP) on Sunday announced that they would contest the upcoming assembly elections in Haryana in alliance.

The BSP will contest on 50 seats while the JJP on 40 in the 90 member state assembly polls due later this year, JJP leader Dushyant Chautala along with BSP General Secretary Satish Chandra Mishra announced the alliance at a press conference.

In the recently held Lok Sabha elections, the JJP had an alliance with the Aam Aadmi Party (AAP) while the Indian National Lok Dal (INLD) had a pact with the BSP.

"After several meetings of top leaders of both parties, it was decided that JJP and BSP will contest next Haryana Assembly elections in alliance," Chautala said.

Mishra said this alliance has blessings of party supremo Mayawati.

He further said the alliance will create a history in the state.

Talking about prospects of the alliance in Haryana, Dushyant said the social fabric of the state has been torn by the current BJP government in the state. This alliance will ensure that it take all sections of society together for overall development of the state.

After both Ajay and former chief minister and party's patriarch Om Prakash Chautala were in jail, it was Abhay who was running the show in the INLD.

Till last year, INLD was the principal opposition party in the state, but with the announcement of Lok Sabha elections many party MLAs and other leaders jumped the ship and joined ruling BJP.

In the last assembly elections, the BJP for the first formed government in the state on its own by winning 47 seats. It had defeated Congress which was in power in the state for ten years. And INLD became the principal opposition by winning 19 seats.

Haryana based INLD which has been out of power in the state for the last 15 years has started splintering which began with the formation of the JJP.