India   All India  11 Aug 2019  I am best friend India can have in Sri Lanka: Mahinda Rajapaksa
India, All India

I am best friend India can have in Sri Lanka: Mahinda Rajapaksa

For Sri Lanka, India is the closest neighbour and their influence is very much felt here, says Mahinda Rajapaksa. 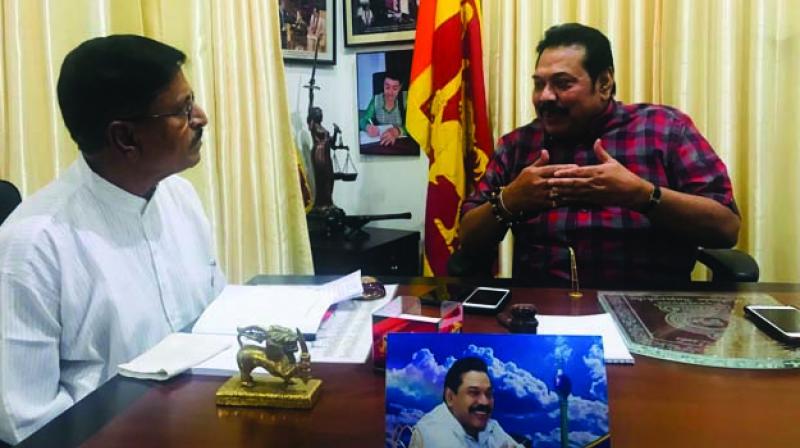 In an exclusive interview to R. Bhagwan Singh just an hour before his scheduled meeting with the leaders of Opposition alliance late Saturday evening at his residence in Colombo, where he was expected to break his silence on the presidential candidate for his Sri Lanka Podujana Peramuna (SLPP) — means Sri Lanka Peoples’ Front — former President of Sri Lanka Mahinda Rajapaksa insists the fears in India about him being pro-China “are unfounded” and he is “the best friend India can ever have in Sri Lanka”. Asked to comment on the Kashmir developments, he said the two nuclear powers should sit down and talk, aided by a third party both would trust, such as the Secretary General of the United Nations.
Excerpts from the interview:

Everyone seems to know who your candidate is; they are saying it will be your brother and former defence secretary Gotabaya Rajapaksa taking on SLFP’s nominee in the presidential election in November? And you have gone on the record saying you would be the Prime Minister of Sri Lanka when PM election are held next year?
(Laughs) Yes and No. We have not decided yet (on Gotabaya being the candidate), but the people have decided I think (that it should be Gotabaya).

There were allegations from the Opposition side even last time that you are heading a dynastic rule with you as the President and your brothers in powerful positions in the government and people appeared to have agreed with that when the results came and you lost. Won’t that happen again now?
Those charges are political and not real. The talk of dynastic rule is not relevant anymore since the people want it for their own sake. They want safety, security. They want development, they want jobs. We will deliver that. Gotabaya is not a bad man as they (Opposition) projects, he is a man of action and he is not of many words, operates quietly. With him as the President and I, being the elder political leader with vast experience as the Prime Minister, we can together deliver to the people what they badly need now. And people are aware of that. Now there is no law and order, no democracy, no elections to provincial councils despite the 13th Amendment. The present government had been only busy indulging in persecution and prosecution, and taking revenge of people associated with my government. Delhi knows that we will deliver security and development to Sri Lanka and also ensure good relations with India.

And that attack on Muslims that they attributed to Mr Gotabaya?
That was a lie spread by them. They would go and attack Muslim villages and say loudly, ‘Vote for Rajapaksa’, so the blame would be on us. It was an organised and planned campaign against us. But now the Muslim people know who was really responsible, they are intelligent and educated.

So you are confident the minorities will vote for you?
Yes. Even the Tamil people are seeing what happened. At least the Muslim ministers in the Cabinet are doing something but the TNA MPs are doing nothing for the people; they are only taking care of themselves. The chief minister in the Northern Province (former Supreme Court judge C.V. Vigneswaran) at least opposes the government whereas the TNA MPs and leaders like Sampanthan and Sumanthiran, are supporting the government but they are not getting anything for the people. They are getting for themselves. When we come to power, I will ensure the Tamils have a settlement acceptable to all within two years.

How are your equations with the Narendra Modi government, because I remember in 2015 you were very unhappy and even blamed Indian RAW for causing your defeat in the Presidential election?
Past is past. We have forgotten it. Now we understand each other better than ever before. India understands that only we can deliver security and development in Sri Lanka whereas the present dispensation is ridden with conflict between President Maithripala Prime Minister Ranil Wickremesinghe which was one of the reasons why the Easter blasts happened. I went to meet him (Modi) in May. In the past (2015), they were worried because two (Chinese) submarines came here (Colombo port) and went back. But now what has happened? They have come and they have stayed. They are very much here all the time since Hambantotta port has been sold to the Chinese, who have been given many other assets and projects, such as 200-year-lease for the Colombo Port City, and so on. They (Chinese) are permanently here now.

Will you be able to change this situation if you come to power, to change the ratio of Chinese presence compared to Indian projects here?
We have to negotiate these things; when you sign agreement with another country we are bound by that. But India can step up (involvement, investment), such as the airports at Palaly and Mattala, and the petroleum tanks in Trincomallee. Our policy is that we are against privatisation.

Do you concede that India is a critically important ally to you, particularly after the Easter bombings? India had sent your government alerts but they went ignored?
For Sri Lanka, India is the closest neighbour and their influence is very much felt here. And as far as I am concerned, India’s best friend will be Mahinda Rajapaksa. And yes, India alerted us about the bombing danger but that went unheeded because they (President Maithripala and PM Ranil) were fighting among themselves. A country cannot be run effectively by two power-centres.

How do you look at the situation in Kashmir, and the action taken by the Modi government?
What was done there was an internal matter of India, no? But still, I would say that being nuclear powers and neighbours, they (India and Pakistan) could sit together and talk. Perhaps a third party trusted by both could bring them both to the table, someone like the UN Secretary-General.