According to reports, the flood gates of 25 dams were opened at different intervals to release water. 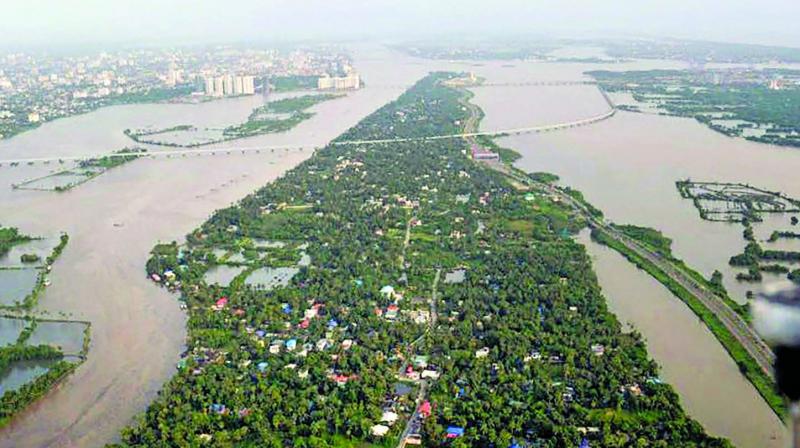 An aeriel view of the floods in Aluva after heavy rains in Kerala. (Photo: PTI)

Thiruvananthapuram: Torrential rains continued to batter various parts of the state on Friday taking the death toll to 29.

The government has sounded red alert in eight districts following heavy rains. Red alert will be in place in  Wayanad till August 14, Idukki till August 13 and Alappuzha, Kottayam, Ernakulam, Palakkad Malapuram and Kozhikode till August 11.

According to reports, the flood gates of 25 dams were opened at different intervals to release water.

Nearly 54,000 people have been affected by floodwaters. Two columns of Army have been requistioned for Aluva as the water from Idukki dam is expected to reach the region by 10-11 pm on Friday night.

At least 60 tourists, including 20 foreigners, stranded at the Plum Judy resort at Munnar since Wednesday were rescued and taken to safer places.

A high level meeting convened by Chief Minister in the decided to deploy more senior officers for coordinating the relief and rescue operations in the affected districts.,

Mohammad Hanish and Rajamnikam will coordinate the work in Ernakulam district. Land revenue commissioner A.T. James has been deputed in Wayanad. He will be assisted by senior police officers

The Chief Minister directed the district authorities to provide potable drinking water to people lodged in relief camps and those who have been marooned. The district administration has been asked to coordinate the activities with the local bodies and Kerala Water Authority.