A JU student said the university is an autonomous body and the state govt cannot impose its rights and decisions to form the council. 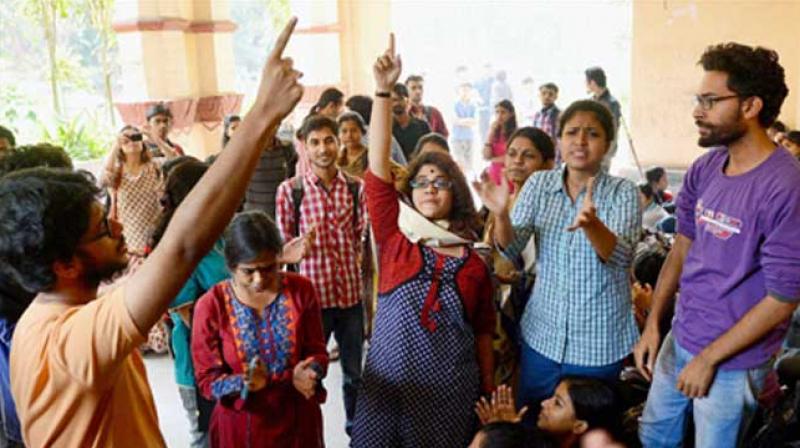 Students of Jadavpur University are firm to continue protesting until their demands are met. (Photo: PTI)

Kolkata (West Bengal): Students of the Jadavpur University continue to protest over a demand that the Executive Council should declare the council model formed by the state government as unacceptable and undemocratic.

Hironmoyee, a student of the university claimed that the vice chancellor was trying to ignore their demands over the withdrawal of the council model and discussed on several unwanted and unrelated issues.

Hironmoyee further said, "We simply demand the Executive Council should declare that the Council model formed by the state government is unacceptable and undemocratic and want our own Executive Council decided by the majority of the stakeholders of the university."

A student of JU said that the university is an autonomous body and that the state government cannot impose its rights and decisions to form the council.

"We are on sit-in demonstration protest and demand to withdraw the council model formed by the state government. The students, teachers and the non teaching staff of the university are completely against the government's decision," a JU student said.

Students are firm to continue protesting until their demands are met. A section of JU students even barged into the EC meeting to submit a deputation and asked for a written assurance from the administrative decision-making council to meet their demands.