Outgoing V-P warns of ‘tyranny’ if criticism is not allowed; BJP hits back, VHP likens Ansari to Jinnah. 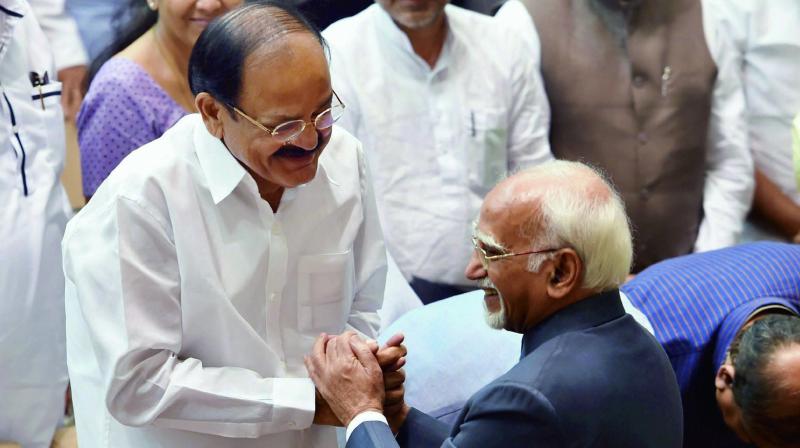 Without actually naming Mr Ansari, the vice-president-elect dismissed the view that there was a sense of insecurity among minorities, saying this was nothing but “political propaganda”. On Wednesday, speaking to a television channel, Mr Ansari had claimed there was “unease” and a “sense of insecurity” among Muslims in India, and that the “ambience of acceptance” was now under threat. The VHP on Thursday described Mr Ansari as the “new avatar of Mohammad Ali Jinnah”.

Speaking to the media, Mr Naidu said: “Some people are saying the minorities are insecure. It is a political propaganda.” The vice-president-elect then pointed out that “compared to the entire world, the minorities are more safe and secure in India and they get their due”. Mr Naidu also cautioned against creating a divide in the nation by singling out one community. “If you single out one community, other communities will take it otherwise. That is why we say all are equal. Appeasement for none, and justice for all,” Mr Naidu remarked.

The vice-president-elect maintained that “history has proved there is no discrimination against minorities”. The BJP also lashed out at Mr Ansari for his remarks and wondered whether he was looking for “rehabilitation after retirement”.

In his farewell speech on Thursday, Mr Ansari yet again took a jab at the BJP by raising the contentious issue of  “intolerance”. On the last day of his 10-year tenure in the nation’s second-highest constitutional post, Mr Ansari said that “a democracy could degenerate into a tyranny if free and frank criticism of government policies was not allowed”. Quoting former vice-president Sarvapalli Radhakrishnan, the outgoing vice-president said: “A democracy is likely to degenerate into a tyranny if it does not allow the Opposition groups to criticise fairly, freely and frankly the policies of the government.” Mr Ansari also maintained that “a democracy is distinguished by the protection it gives to the minorities. But at the same time, the minorities also have their responsibilities.”

Mr Naidu also disagreed with Mr Ansari’s views on “intolerance” and made it clear that “Indian society is the most tolerant in the world because of its people and civilisation. There is tolerance... that is why democracy is so successful”.

Targeting the outgoing vice-president for his comments, the BJP said such a “petty” remark was not expected from someone in his position. Condemning the remarks, BJP general secretary Kailash Vijayvargiya asked if Mr Ansari was looking for “some political rehabilitation”. He said Mr Ansari was “still the vice-president, and such remarks do not suit the dignity of his office”.

The VHP also pounced on Mr Ansari and accused the outgoing V-P of following the path of the “founder of Pakistan”. The VHP’s Surendra Jain said with his remark that “Muslims feel insecure in the country”, Mr Ansari had insulted the post of vice-president, the government and the entire Hindu community. The VHP said by making such statements it seemed that like Mohammed Ali Jinnah, Mr Ansari too “wants to push the country towards another Partition”.