Venkaiah Naidu was sworn in as the 13th Vice President of India on Friday. 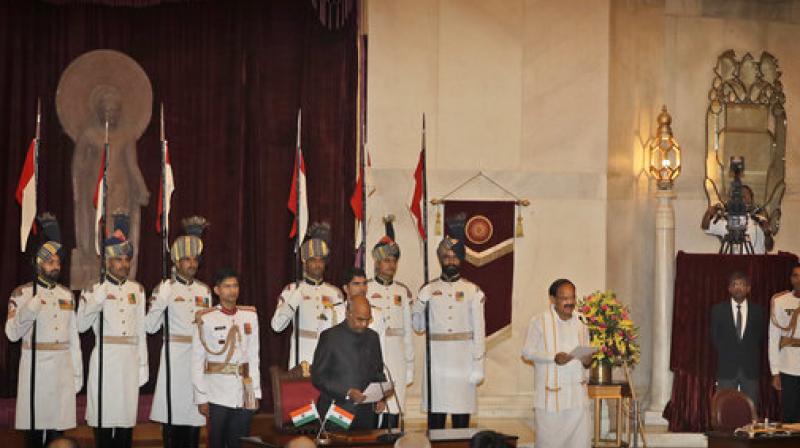 President Ram Nath Kovind administering the oath of office and secrecy to Venkaiah Naidu as India's Vice President in the Durbar Hall of Rashtrapati Bhawan in New Delhi on Friday. (Photo: PTI)

New Delhi: Prime Minister Narendra Modi on Friday welcomed Venkaiah Naidu as the Rajya Sabha Chairman, saying he is the first Vice President who was born in independent India, adding that the former Union Minister knows the workings of the House very well after being active in it for so long.

Naidu takes over the charge from Hamid Ansari whose second term ended on Thursday.

"Venkaiah Naidu is a farmer's son and during his tenure as Poverty Alleviation Minister, he has always upheld the interests of the poor, said Modi while speaking in Rajya Sabha.

Modi further stated that the presence of a farmer's son in a highly dignified position is a proof of a "matured democracy" in India.

Leader of Opposition Ghulam Nabi Azad advised the former to be unbiased and give importance to justice above any party or religion.

"When one person is in a particular party, he works his best to spread the party's ideologies and view point among people. But when the same person becomes a minister, his responsibility turns towards both the party and people of India. There's a third position, where you (Venkaiah Naidu) are in today and I congratulate you for that; this position reminds us of the fact that we have to unbiased. When one is in this position, wisdom and justice becomes more important than party or religion," Azad said in the House.

Naidu was sworn in as the 13th Vice President of India on Friday, succeeding Hamid Ansari, in a glittering ceremony.

President Ram Nath Kovind administered him the oath of office and secrecy at Rashtrapati Bhavan in Delhi.

Following the ceremonial reception Naidu took over as the speaker of the Rajya Sabha in the Parliament.

Earlier on Friday, he visited Rajghat to pay floral tribute to the memorial of Mahatma Gandhi.

Born at Chavatapalem in the Nellore district of Andhra Pradesh on July 1, 1949, Naidu is the second Vice-president from Andhra Pradesh.

Before joining active politics, Naidu was much of a social worker. After completing his graduation, Naidu pursued law from Andhra University in Visakhapatnam.

Venkaiah Naidu's entry into politics was marked by his active participation in 'Jai Andhra Movement' of 1972. He was a swayamsevak in the Rashtriya Swayamsevak Sangh (RSS) and Akhil Bharatiya Vidyarthi Parishad (ABVP) in 1973 during his college days.

After the Bharatiya Janata Party (BJP) was formed in 1980, he became Vice president of its youth wing. He was leader of the BJP Legislature Party in Andhra Pradesh, state general secretary and state unit chief.

He won the Andhra Pradesh assembly elections twice in 1978 and 1983 from Udayagiri constituency and was made national president in 2002.

Naidu was elected as a member of the Rajya Sabha from Karnataka in 1998 and was re-elected twice in 2004 and 2010 from Karnataka.

He served as the Minister of Housing and Urban Poverty Alleviation and Information and Broadcasting in Prime Minister Narendra Modi Government before he was nominated for the post of Vice President.