India   All India  11 Aug 2017  Govt turns to sharpshooter to kill elephant that crushed 15 to death
India, All India

In 2014, the shooter was licensed by Uttar Pradesh to capture or kill a man-eating tiger that was believed to have killed eight people. 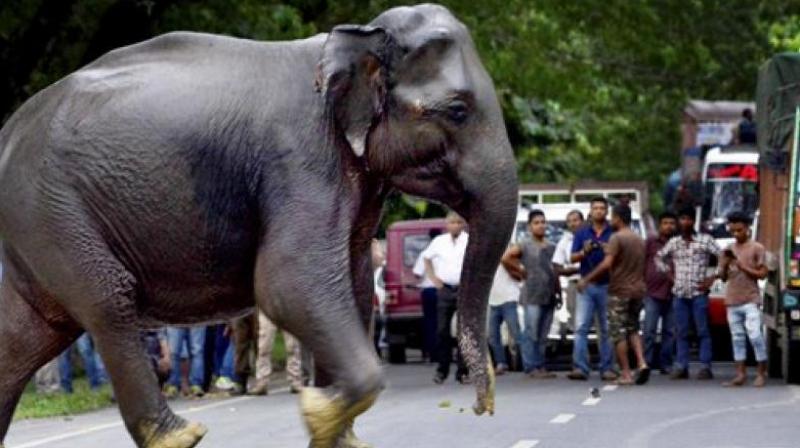 Jharkhand's chief forest and wildlife conservator LR Singh said the decision to kill the animal was made after a team failed to tranquilise and capture the elephant during a week-long mission. (Photo: PTI/Representational)

New Delhi: India's top hunter on Friday led a shoot-to-kill pursuit of an elephant whose murderous rampage through villages has left 15 people dead.

The government has turned to sharpshooter Nawab Shafat Ali Khan ahead of World Elephant Day on Saturday to hunt the animal who crushed four victims in the eastern state of Bihar in March before crossing into neighbouring Jharkhand and killing 11 more.

Jharkhand's chief forest and wildlife conservator LR Singh said the decision to kill the animal was made after a team failed to tranquilise and capture the elephant during a week-long mission.

Singh blamed the failure on the rocky terrain and thick vegetation in Sahibganj district. "The visibility is only 15 feet and it becomes next to impossible to tranquilise the animal," Singh said.

"It has already killed so many people. There have been two deaths just in the last four days. Despite all the efforts by the forest department and our teams working 24*7, we had no option but to order the shooting of the animal," he added.

The marauding elephant, believed to have lost its way after becoming separated from its herd, has strayed into villages in hillier parts of Sahibganj. The area is inhabited by the Paharia tribe, one of the poorest indigenous tribal communities in India. Of the 11 deaths in the state, nine of the victims were Paharias, Singh said.

Khan has been flown in from the southern city of Hyderabad to kill the prey. "He is one of the best out there. He has vast experience in shooting such rogue animals and that's why he has been given the responsibility to shoot the elephant," he said. "We expect him to get the animal anytime now- today, tonight, tomorrow- anytime."

In 2014, Khan was licensed by the northern state of Uttar Pradesh to capture or kill a man-eating tiger that was believed to have killed eight people. Elephants kill roughly 60 people every year in forested Jharkhand, Singh said.

An estimated 1,100 people died across India from elephant or tiger attacks in the three years to May. The environment ministry estimates a human dies every day in India in clashes with endangered animals- the vast majority crushed by elephants.

Violent encounters between elephants and humans are an "increasing trend", said Singh, as vast swathes of forest are cleared for human settlements and industry.