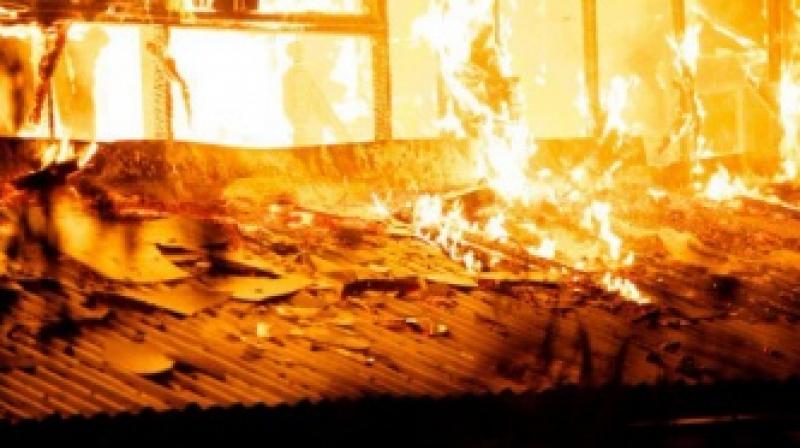 Darjeeling: A Gorkha Janmukti Morcha (GJM) office was set ablaze by unidentified persons in Darjeeling on Thursday, while the party claimed it had not received any formal invitation from the West Bengal government for talks as the indefinite strike in the hills entered its 57th day.

This was the first instance of a GJM office being attacked since the party called the indefinite shutdown in the Darjeeling hills.

The GJM leadership accused the police and district administration of attacking its office. The police, however, denied the allegation.

Meanwhile, in a statement, GJM general secretary Roshan Giri said, "During the last one week, (Chief Minister) Mamata Banerjee has announced only at public meetings and to the media that she is open to discussions to resolve the impasse."

He alleged that this was nothing but an "eyewash" as "no formal communication (in this regard) has reached the GJM".

"It seems that she (Banerjee) is misleading not only the GJM but the entire population of Bengal. It shows that she is not sincere and honest in her statements, acts and deeds and is reluctant to find out an amicable solution (to the crisis). She is rather trying to camouflage the scenario with a double standard strategy," alleged Giri.

His comments came in the backdrop of Banerjee, earlier this week, urging the hill parties to shun violence and come to the discussion table.

"The GJM still feels that the long-pending issues of the Gorkhas should be attended to without further delay by both the state and central governments," said Giri.

Asked if the GJM was ready for talks with the state government, he said, "Only party supremo Bimal Gurung can answer your question."

Condemning the incidents of looting and torching the vehicles carrying essential commodities to the hills, Giri said, "It is being said that these incidents were the handiwork of masked miscreants. In reality, these were efforts to damage the image of the democratic agitation by the GJM and create a sense of fear among the masses."

In a jibe at the state government, he said it should arrest those outsiders, supporting the GJM's separate Gorkhaland demand, whom it claimed to have identified.

The GJM leader alleged that the state government and police had "let loose a reign of terror through indiscriminate arrests and slapping of non-bailable charges" against the activists of the party.

"We had earlier told them to shun violence and sit for talks, an offer they declined. Our government wants peace in the hills. What violence are they (GJM) talking about? What have they done over the last two months in the hills?" he asked.

Asked about Giri's claim that no formal invitation for talks was sent to the GJM, Deb said, "We had repeatedly asked them (GJM) to come forward for talks, but they said they would only talk to the Centre. They did not attend the all-party meeting convened by the state government. Chief Minister Mamata Banerjee had repeatedly requested them to sit for talks. What else do they want?"