Rajesh Misra has denied all the allegations by her daughter and said that she is independent to make her own decision. 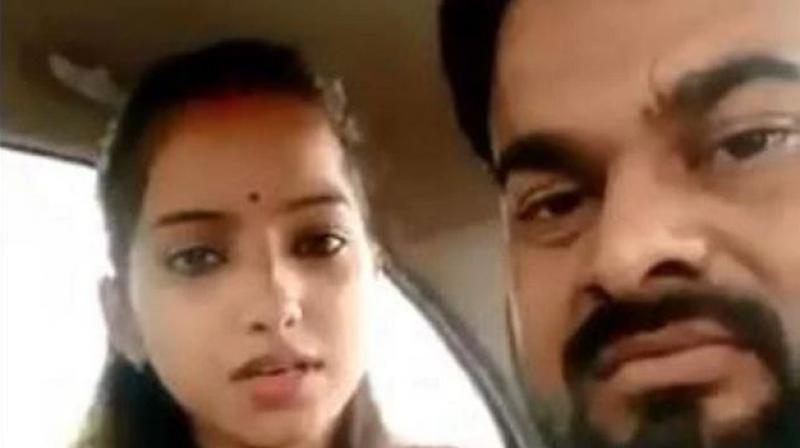 In another video, she has apprehended threat to her life from her father, brother and an associate, and urged the Bareilly senior superintendent of police to extend security to them. (Photo: Screengrab)

Lucknow: The daughter of a BJP legislator from Uttar Pradesh on Thursday moved the Allahabad High Court to seek police protection, citing threat to her life from her father after marrying a man outside her caste.

The matter came to light on Wednesday after Sakshi Misra, 23, who is the daughter of MLA Rajesh Misra, posted a video on the social media requesting the Uttar Pradesh Police to provide security as she and her husband face a threat from her father and brother, who, she alleged, are trying to get her killed.

Sakshi's lawyer Vikas Rana told the media on Thursday that the petition has been admitted by the court and the hearing has been adjourned to next week as the couple could not show up in the court today due to security concerns.

Addressing her father in a separate video on Wednesday, Sakshi had said that she is happy with her decision, and appealed him to stop sending goons after her but let her live in peace.

"We are tired of hiding around. Our lives are in danger. Please stop troubling Abhi (Sakshi's husband) and his relatives. They are not at fault here. The decision is ours. I want to live free and happy," said Sakshi.

Meanwhile, Harish Kumar, the father-in-law of Sakshi Misra, told media that he has sought police intervention in the matter after hearing from the couple that they were receiving death threats.

"I didn't want to take action as it was between the families. But his [Rajesh's] men sent them a message that they'll be killed. You can see she's taking names in the video. I sent the marriage certificate and an application to SSP Bareilly."

In his statement to media on Thursday, Rajesh Misra has denied all the allegations by her daughter and said that she is independent to make her own decision.

"The reports circulating in media against me are wrong. My daughter has the right to take her own decisions. No threats to her were made by me or from anyone in my family. We are busy with our work. May she be happy wherever she is," said the BJP leader

Misra is the BJP MLA from Bithari Chainpur in Bareilly district.