Around 62,400 people are suffering due to flood in Dhemaji, Lakhimpur, Biswanath, Barpeta, Chirang, Golaghat, Jorhat and Dibrugarh districts. 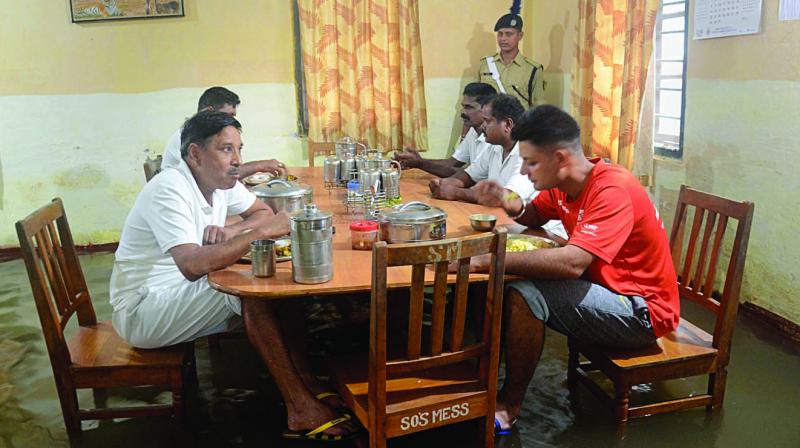 The flooded mess of a CRPF base camp following heavy monsoon rains in Dibrugarh, Assam, on Wednesday. (Photo: PTI)

Guwahati: With massive rainfall activities across the Northeastern states, the flood situation on Wednesday, deteriorated in Assam as rivers in spate has started hitting the plain areas.

Informing that the flood has affected over 62,000 people across eight districts of the state, the Assam State Disaster Management Authority (ASDMA) in its bulletin said that 145 villages are under water and 3,435 hectares of crop areas have been damaged.

The situation could turn worse as the India Meteorological Department (IMD) has forecast enhanced rain in the Northeastern states, including Assam in the next few days.

Around 62,400 people are suffering due to flood in Dhemaji, Lakhimpur, Biswanath, Barpeta, Chirang, Golaghat, Jorhat and Dibrugarh districts.

The ASDMA said that authorities have already started five relief camps and distribution centres in two districts, where 203 people are taking shelter.

Embankments, roads, bridges, culverts and many other infrastructure have been damaged at various places in Barpeta, Udalguri, Lakhimpur, Sonitpur and Jorhat districts.

The authorities have recorded massive erosions at various places of Sonitpur, Udalguri, Jorhat and Barpeta districts.