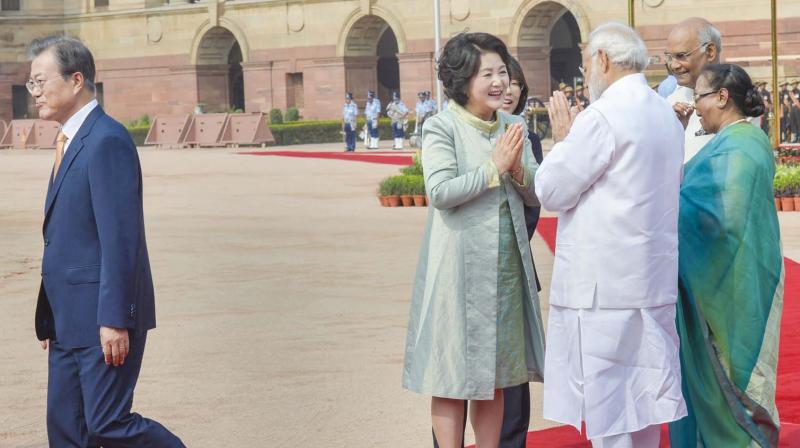 New Delhi: Prime Minister Narendra Modi and visiting South Korean President Moon Jae-in on Tuesday agreed to consolidate the bilateral special strategic partnership, with the two nations inking 11 pacts, including one on an “early harvest package” of the upgraded Comprehensive Economic Partnership Agreement and “cooperation in development of cutting-edge technologies for commercialisation to reap benefits of the fourth industrial revolution”. The two nations agreed to “work towards the goal of raising bilateral trade to $50 billion by 2030”, and committed to boost defence cooperation.

Mr Modi also said India was a stakeholder in the success of the peace process in the Korean peninsula, adding that India would do whatever it could to reduce tension in the Korean peninsula. In his talks with President Moon, Mr Modi also raised India’s proliferation concerns between “North-East Asia” and “South Asia”, a veiled reference to the longtime North Korea-Pakistan clandestine nexus in nuclear and missile technology. While New Delhi said South Korea was an “indispensable partner” in India’s Act East policy, Seoul said India was a “central pillar” of South Korea’s “New Southern Policy”. An interesting cultural pact inked was the “Queen Suriratna Memorial Project” for the “upgradation and expansion of the existing monument (at Ayodhya in UP) commemorating Princess Suriratna (Queen Hur Hwang-ok), a legendary princess of Ayodhya who went to Korea in AD 48 and married (Korean) King Kim-Suro”.

The pacts inked between the two countries included a “Joint statement on Early Harvest Package of the Upgraded Comprehen-sive Economic Partners-hip Agreement” to “facilitate ongoing negotiations on upgrading the India-RoK CEPA by identifying key areas for trade liberalisation”. The “early harvest” refers to steps to boost trade swiftly through expansion of the trade basket for goods and services between the two nations. Another MoU inked was on a “Future Strategy Group” for “cooperation in development of cutting-edge technologies for commercialisation to reap benefits of the 4th Industrial Revolution” in “thrust areas, including the Internet of Things (IoT), Artificial Intelligence (AI), Big Data, Smart Factory, 3D Printing, Electric Vehicles”. Both sides are also exploring “planning and execution of (railway) joint research projects, including setting up an advanced railway R&D facility in India”.

In his speech, Mr Modi said: “During our talks, I told President Moon that proliferation linkages between North-East Asia and South Asia is a matter of concern to India. Therefore, India is also a stakeholder in the success of the peace process (in the Korean peninsula). We will offer whatever cooperation we can to reduce tension.”

The two countries also released a vision document that stated: “We (the two leaders) reaffirmed our mutual desire to further strengthen the (South Korea) ROK-India ‘Special Strategic Partnership’ built on the foundations of deep-rooted historical and cultural bonds, and based on shared universal values of democracy, free market economy, rule of law, common commitment to a peaceful, stable, secure, free, open, inclusive and rules-based region.” ... The two countries also “agreed to explore tripartite partnership for development in third countries, beginning with capacity building programmes in Afghanistan”.

On boosting defence cooperation, the vision document said: “Recognising the important role of the two countries in ensuring peace and stability in the region, including India’s historical association with peace efforts following the Korean War, we agreed to explore further possibilities to coordinate efforts in the defence and strategic spheres in order to benefit from each other’s unique capabilities and experience. In this context, ROK and India will enhance military exchanges, training and experience-sharing, and research and development, including innovative technologies for mutual benefit. We also agreed to encourage our defence industries to intensify cooperation in this regard.” Currently, the largest defence deal so far between the two nations is one for acquisition by the Indian Army of 150 “Vajra” self-propelled 155 mm artillery guns (K-9 Thunder) worth $870 million.

On the situation in the Korean pensinsula, it said: “We (PM Modi and President Moon) welcomed the recent positive developments facilitated by the ROK, including the historic inter-Korean summits, as well as the US-DPRK summit. We hope that these developments will contribute to complete denuclearisation as well as lasting peace and stability in the Korean Peninsula.”