The LeT strongly denied the charge and sought to blame the killings on Indian intelligence agencies. 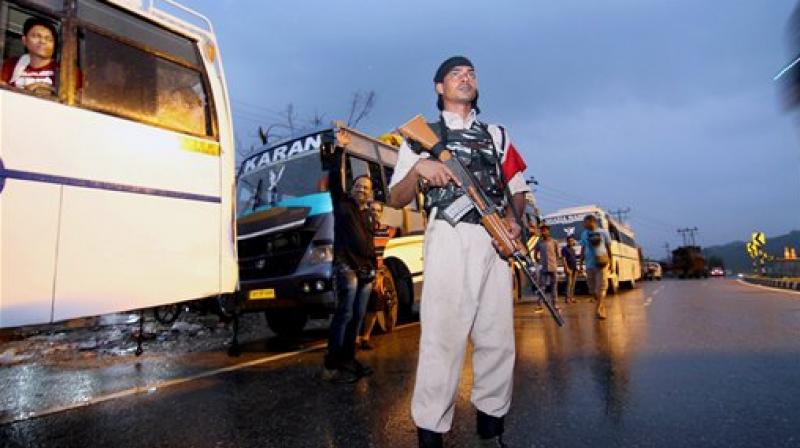 A paramilitary security personnel keeping vigil as a convoy of Amaranth pilgrims leave for Kashmir on the outskirts of Jammu on Tuesday. The security has been beefed up along the Jammu-Srinagar national highway in the wake of the yesterday's militant attack on pilgrims. (Photo: AP)

Srinagar: Jammu and Kashmir police on Tuesday said there are “credible inputs” pointing towards the involvement of the Lashkar-e-Taiba (LeT) in Monday’s gory attack in which seven Amarnath pilgrims were killed and eleven others injured in southern Anantnag district.

However, the LeT strongly denied the charge and sought to blame the killings on Indian intelligence agencies.

The incident has been widely condemned across the country. A general strike is being observed in Jammu region of the State Tuesday to mourn and protest the wanton killing of innocent pilgrims.

The Internet services have been snapped in the Hindu-dominated region “as a precautionary measure to prevent misuse of the social media platforms for spreading rumours”.

Chief Minister Mehbooba Mufti on Tuesday summoned an emergency meeting of her cabinet to review the security situation across the state in the backdrop of the terror strike.

She had, while expressing deep shock and anguish over the killings, asked security forces including the J&K police to “act swiftly and arrest the perpetrators so that a stern message went out to anti-social elements that severe and punitive action can be taken against them if they went against the law”.

She reiterated Amarnath pilgrims were esteemed guests of Kashmir and “perpetrators of crime have done a death blow to the ethos and culture of the state”.

LeT spokesman Dr Abdullah Ghaznavi termed the attack a “highly reprehensible act”. He said, “Islam does not allow violence against any faith. We strongly condemn such acts.”

Reacting to the police claim, Ghaznavi said Kashmiris have never targeted any pilgrim. “This barbarity and atrocity is the trademark of Indian forces,” he alleged. He said, “India wants to sabotage the freedom struggle of Kashmiris. Therefore, it uses such attacks to fulfil its nefarious agenda. At times, India uses Hindus of Uttar Pradesh to hide its terror face, and when it fails, they use false flag attacks against Amarnath Yatris.”

Inspector General of Police (Kashmir range) Munir Ahmed Khan while speaking to reporters reiterated the police’s earlier statement that the gunmen had initially attacked a police bunker at Botengo, 56-km south of Srinagar, and that the fire was returned, the exchange which did not cause any casualties though.

He said that soon thereafter, the terrorists targeted a police naka party at neighbouring Khanabal, the gateway to Anantnag town along the Jammu-Srinagar highway, and again the fire was returned.

A tourist bus carrying pilgrims mainly from Gujarat which was on way to winter capital Jammu from Baltal, a base-camp of the Amarnath yatra, was caught in the crossfire fatally injuring seven people on board. The other injured are being treated at Srinagar’s 92-Base Army Hospital, the officials said.

The police said the bus was not part of the Amarnath pilgrim convoy. Such convoys are provided security cover right from Lakhanpur in Kathua district of Jammu region to the base-camps of Baltal and Pahalgam and back.

Also as per the ‘Standard Operation Procedure’ vetted by the Shri Amarnathji Shrine Board (SASB), no vehicle carrying Amarnath pilgrims is allowed to move between the base-camps and Jawahar Tunnel beneath the Pirpanjal Range which connects the state’s Jammu region with the restive Kashmir Valley after nightfall.

The police authorities had before the start of the 40-day yatra categorically stated no vehicle carrying pilgrims would be allowed to cross the Jawahar Tunnel after 3.30 pm. “This has been done so that the yatris reach the Baltal base camp in seven hours from the tunnel and they don’t have to make a night halt midway,” they had said adding “This will ensure that they don’t travel after nightfall”.

The officials said they were also investigating how the bus carrying Amarnath pilgrims was moving along the “most vulnerable” stretch of the Srinagar-Jammu highway after sunset. The attack took place around 8.15 pm.

Meanwhile, a fresh batch of devotees on Tuesday left for the cave-shrine under the security forces’ escort from Jammu.