Sends notice to makers of a film which is set around the Emergency. 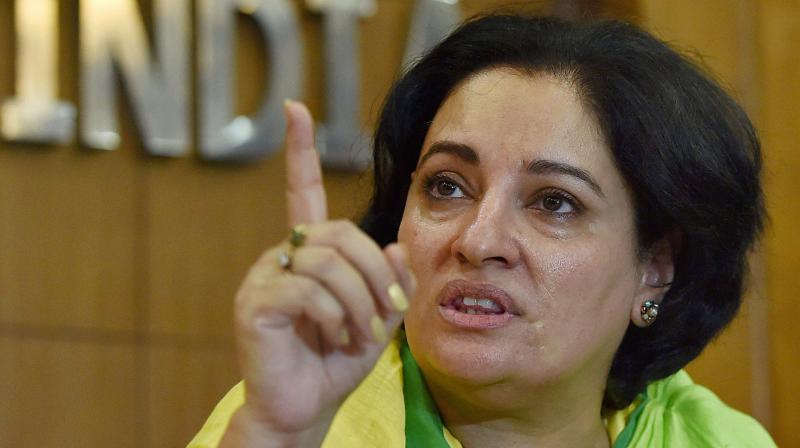 Gurgaon-based Priya Singh Paul, who claims to be the daughter of Sanjay Gandhi, talking to media during a press conference in New Delhi. (Photo: AP)

New Delhi: A political controversy was triggered on Monday after a woman, Priya Singh Paul (48), alleged that she was the biological daughter of late Congress leader Sanjay Gandhi and granddaughter of former Prime Minister Indira Gandhi.

While addressing mediapersons, Ms Paul claimed that she was born in 1968 and adopted in 1974, and that the reason given for her adoption was that since her biological father was in politics, the child was required to stay separately for sometime.

Ms Paul has even sent a legal notice to the makers of the upcoming film Indu Sarkar, based on the controversial topic of Emergency. The notice has been forwarded to the film’s director Madhur Bhandarkar, producer Bharat Shah and also to chief of the censor board Pahlaj Nihalani for clearing the film. The notice says that the film inaccurately depicts events of the Emergency and the protagonist, Sanjay Gandhi, whom Ms Paul claims to be her biological father.

“I am not ashamed, I just want to protect the name of my family. I am not after power or fame,’’ she said.

Ms Paul said that she was informed by Vimla Gujral, sister of former Prime Minister I.K. Gujral, in 2010 that Sanjay Gandhi was her biological father. She added that following the death of her adoptive mother, she started looking for her roots. She has also filed a case in Tis Hazari court to establish her lineage and access papers of her adoption earlier this year.

Neither the Congress nor the Gandhi family reacted to Ms Paul’s allegations. Sanjay Gandhi was the younger son of the former Prime Minister Indira Gandhi. He was married to Union minister Maneka Gandhi. Their son, Varun Gandhi, is a sitting Lok Sabha