India   All India  11 Jun 2022  Some political parties behind Howrah violence, strict action will be taken: Mamata
India, All India

Some political parties behind Howrah violence, strict action will be taken: Mamata 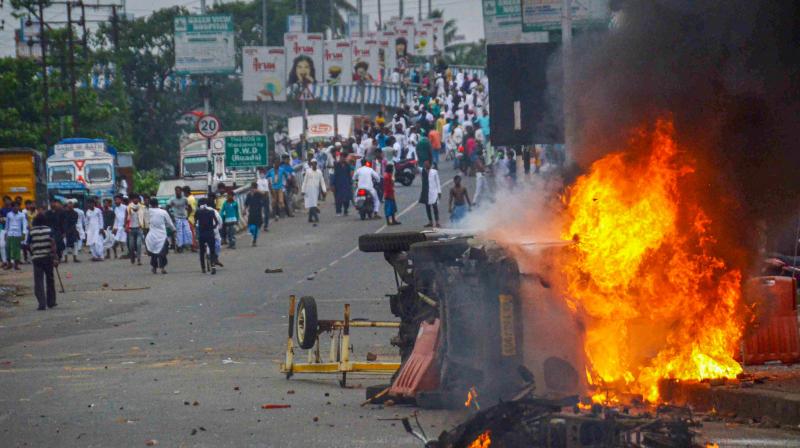 Flames and smoke rise from a vehicle on fire, that was allegedly set ablaze by miscreants during a protest over controversial remarks made by two now-suspended BJP leaders about Prophet Mohammad, in Howrah, Friday, June 10, 2022. (PTI Photo)

Kolkata: West Bengal Chief Minister Mamata Banerjee on Saturday claimed that some political parties were behind the violent incidents that rocked Howrah district and promised to take strict action against those attempting to instigate riots in the state.

She also questioned why should common people suffer because of "sin" committed by the BJP, in reference to controversial remarks by suspended and expelled party leaders on Prophet Mohammad which triggered the violent protests.

"As I have said before, normal life has been affected by violent incidents in Howrah over the last two days. Some political parties are behind this  they want to instigate riots. But this won't be tolerated and strict action will be taken against those involved. Why should common people suffer because of sin committed by BJP," Banerjee tweeted in Bengali.

Agitators resorted to stone-pelting, setting police vehicles on fire and damaging public property during violent protests and clashes with the law enforcers in the district.

Internet services have been suspended across the district till June 13 and prohibitory orders under Section 144 of CrPC imposed in several areas such as Uluberia, Domjur and Panchla till June 15.

Common people had to suffer as road and railway tracks were blocked by protesters in the district. Several local and express trains were cancelled due to the violence.