India   All India  11 Jun 2019  Italians are grateful to Indian soldiers who had helped them in World War II
India, All India

Almost 50,000 Indian troops, mostly between the ages of 19 to 22, fought for Italy’s liberation during World War II. 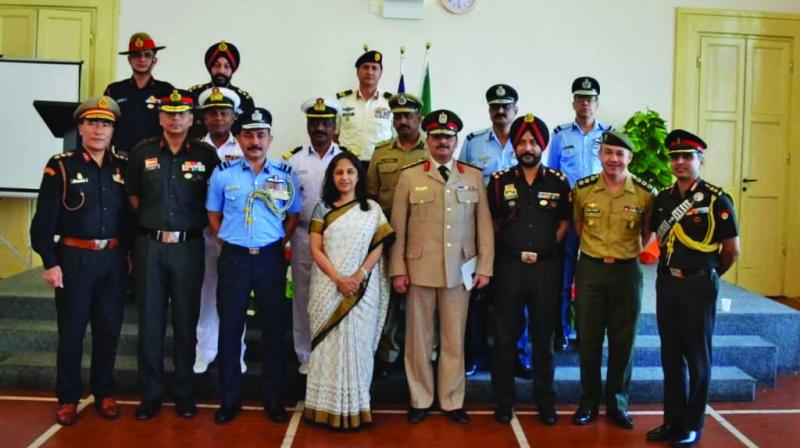 Indian ambassador to Italy, Reenat Sandhu and a group of Indian, Italian and other foreign officers at the Urn Presentation ceremony.

A solemn ceremony was organised in Prato, near Florence, Italy, on May 29, 2019 to commemorate the sacrifices made by two Indian soldiers — Hari Singh and Palu Ram of the Indian Army during World War II.

The story of their bravery and their sacrifice is still talked about in Italian cities and villages that they helped to liberate. The heroism of the Indian soldiers was visible in the battle to take Monte Cassino, the battle for Sangro river and Liri Valley, the advance along the east coast to Bologna, the crossing of the Senio river and the battle of Gothic lines. The main cemeteries where Indian soldiers are buried are Arezzo, Sangro, Cassino, Forli Indian Army War Cemetery and Rimini Gurkha War Cemetery. Among the cities that Indian soldiers helped liberate are Perugia, Luca, Florence, San Marino, Cesena, Forli, Ferrara and Bologna.

In the present case, human bones were found near Florence in 1996 from the Indian area of the battlefield at Poggio Alto near Montale (Florence). The remains were exhumed and investigated by team of doctors. Based on the date of death, location of the remains, anthropometric and morphological examination, findings on boots worn and ammunition used, the researchers matched the Commonwealth records of missing soldiers to ascribe the remains to those of Hari Singh and Palu Ram of the 4/13 Frontier Force Rifles. Service documents of both the individuals were found in the Army records held with the National Archives of India. Based on details of heights provided, the correct identification of the two corpses could be carried out successfully and now the remains of the soldiers have been duly cremated.

The ceremony for the presentation of urns was organised on May 29, 2019 at Public Assistance, Prato (Florence). In addition to a sizeable presence from the community of Prato and the Italian Armed Forces, the ceremony was attended by the mayor, the president of Public Assistance and prefect of Prato. Representatives of the Commonwealth War Graves Commission, the Red Cross Society and a host of other dignitaries of Prato also attended the ceremony. The Indian side was represented by Reenat Sandhu, the ambassador of India and Col. Rohit Teotia, the defence attache to Italy. Sixteen senior officers attending the National Defence College course in India and on a study tour to Italy also represented India and attended the ceremony. The ceremony was conducted with the appropriate military honours after which urns containing the ashes of the individuals were handed over by the Italian authorities to the Indian side, who further handed over the same to the custody of the Commonwealth War Graves Commission. Ashes of these two soldiers will be scattered on July 16, 2019 in the Forli War Cemetery where other comrades from that battlefield have also been commemorated.

In October 2007, as a rare gesture, a solemn ceremony was held for the first time since 1945 at Cassino, where touching tributes were paid to honour 5,782 Indian soldiers. The ceremony was attended by the Indian ambassador to Italy, Rajiv Dogra, the deputy defence minister of Italy, Emidio Casula, the mayor of Cassino, Bruno Scittarelli, the ambassadors from a number of countries and senior generals of the Italian Army and the Indian Army.

Monte Cassino was where the most fierce battle of the Italian campaign on the Gothic Line of Defence of the German Army was fought. Recalling that battle, Italy’s Army Chief, Gen. Fabrizio Castagnetti said: “The fourth, eighth and tenth Indian Infantry Divisions were employed in the battle for the capture of Monte Cassino and in the bitter campaign that followed for the breaching of the Gothic Line.” Field Marshal Wavel wrote: “The fame of this (Fourth) Division as one of the greatest fighting formations will be remembered in military history, just like the Tenth Legion, the Light Division who fought in the Peninsular War and the old Napoleonic Guard.” Speaking on the occasion, deputy defence minister Emidio Casula recalled the sacrifices of the Indian soldiers and added that they were still remembered for the discipline, valour and friendship. The Italian Army arranged a special Guard of Honour by a large number of soldiers signifying the importance attached to the role of the young Indian soldiers in the liberation of Italy.

Another story about the Italians’ tribute to Indian soldiers is written by Capt. Raj Mohindra (Retd.), Indian Navy: “The expression of regret by the mayor of Taranto for the killing of two Indian fishermen by Italian marines from the Enrica Lexie, and his offer to take up the responsibility of educating the bereaved children gains significance due to the city’s historical association with India. I discovered that association quite by chance in 1967 when I was an officer on board INS Brahmaputra. My ship was diverted to Taranto owing to a coup against King Constantine in Greece, our original destination. The ship berthed in Taranto in the early hours of a Sunday. There was no one there apart from the shore berthing party of a few men.

As time went by, a large number of Taranto’s residents, including several senior citizens, started congregating near the ship. They carried placards welcoming the Indians to Taranto. It was a mystery to us as to why such a crowd was building up. We were told that the news of the Indian ship’s arrival was announced on the local radio. By the evening, the crowd had swelled. Several residents held placards inviting us to dinners, lunches and picnics.

I was invited to dinner by the family of the late Ines Ghosh, the Italian wife of the late Surgeon Rear Admiral J.N. Ghosh of the Indian Navy. Mr Ghosh met Ms Ines in Taranto, where he was a prisoner of war. There I heard heart-rending stories of World War II. They narrated how when the British Eighth Army comprising British, Australian, Canadian and Indian troops and troops from other nationalities invaded southern Italy in July 1943, the soldiers from all armies except the Indian Army indulged in rape, molestation and plunder.

One of the elderly ladies present told us how she was being chased by two Allied soldiers when an Indian soldier intervened and protected her. He told them not to harm her because she was his sister!

In another instance, a posse of Indian soldiers voluntarily guarded an apartment building and prevented soldiers of the other Allied armies from entering it. There were numerous stories of heroism like this. These marvellous episodes bore testimony to the ethical standards and professionalism of the Indian Army.

The following day, there was a special reception in honour of the personnel of INS Brahmaputra in the town hall. Meanwhile, invitations from the citizenry continued to flow, so much so that the late Capt. Erach Debu, Commanding Officer of the ship, volunteered to keep harbour watch in the ship himself and let all his officers go ashore to attend the functions. Several shops refused to accept money for the merchandise purchased by the ship’s personnel. When the ship left port finally after four days, virtually the entire town was on the jetty with several bands in attendance to bid adieu. It was a very moving and emotional experience.

The Italian marines issue has cast an ugly shadow over the two countries. It needs to be resolved in the true spirit of Taranto and in the mutual interests of India and Italy.

Ironically, an old Indian political party which ruled the nation for almost six decades and neglected its armed forces, has for some decades been headed by an Italian and after being voted out of power, has specialised in denigrating the armed forces.