‘The objective of all their actions seems to be to put me behind bars without trial and without hearing,’ he also said. 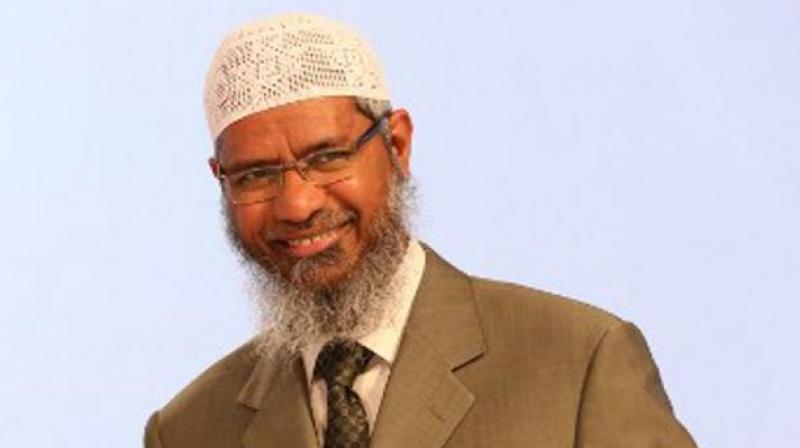 A total amount of Rs 193.06 crore has been identified as ‘proceeds of crime’. The directorate has also attached properties of Naik worth Rs 50.46 crore. (Photo: AFP)

New Delhi: Controversial Islamic preacher Zakir Naik claimed that Indian agencies are "desperately trying to pin fictitious charges" on him and are trying everything possible to put him behind the bars.

Naik also alleged that agencies are targeting him at the behest of their "political bosses".

Yesterday, Malaysian Prime Minister Mahathir Mohamad has said his country has the right not to extradite Naik, for similar reasons that Australia had turned down his country's request to extradite Sirul Azhar Umar in 2015. He added that Naik believes that he would not be accorded justice in India.

"The Indian agencies are desperately trying to pin something on me. Some charges, any charges. Which is why when terror charges did not work with the Interpol, they've moved on to money laundering...." said Naik in a statement.

"As much as I want to hasten up clearing my name from fictitious charges by Indian agencies, they continue an exercise steeped in injustice and unfairness, and are trying everything to put me in jail irrespective of whether I'm guilty or not. The objective of all their actions seems to be to put me behind bars without trial and without hearing. In the process, the Enforcement Directorate continues to waste its time and taxpayers money in bringing about injustice and harassment," he said.

Naik is facing charges of inciting communal disharmony and committing unlawful activities in India. He is also facing probe both in India and Bangladesh in connection with the terror attack at the Holey Artisan Bakery in Dhaka in July 2016. The two suspects in the terror attack had claimed that they were inspired by Naik's radical preaching.

In addition, the Enforcement Directorate (ED) filed a prosecution complaint against Naik, who is believed to be in Malaysia, on money laundering charges on December 22, 2016.

A total amount of Rs 193.06 crore has been identified as "proceeds of crime." The directorate has also attached properties of Naik worth Rs 50.46 crore.

"Why are the Indian agencies getting so desperate? Desperate to comply with the instructions of their political bosses? It surely cannot be desperation to serve justice because they're not sure of the charges themselves. But this desperation is shameful, and it shows in the way they keep shifting focus from one angle to another, from terror to money laundering, just to make something stick on me," Naik said in the statement.

"...The recent history of India is replete with cases of Muslims arrested and put in jail for 8, 10, 15, even 20 years before being declared innocent by the courts. Knowing this record of Indian agencies, I would not like to take a chance of ruining my life and my unfinished work," he added.

He, however, said that if the Supreme Court of India gives him in writing that he will not be arrested and jailed until he is convicted, he is ready to return.

According to the ED, money laundering was conducted via "dubious" origins from the UAE to facilitate production and broadcasting incriminating videos for spreading communal hatred and radicalisation of a particular community.