India   All India  11 Jun 2019  Finance Minister engages with all stakeholders ahead of budget
India, All India

Finance Minister engages with all stakeholders ahead of budget

Sitharaman focused on possible measures to boost the economic infrastructure of the rural sector and to eradicate poverty. 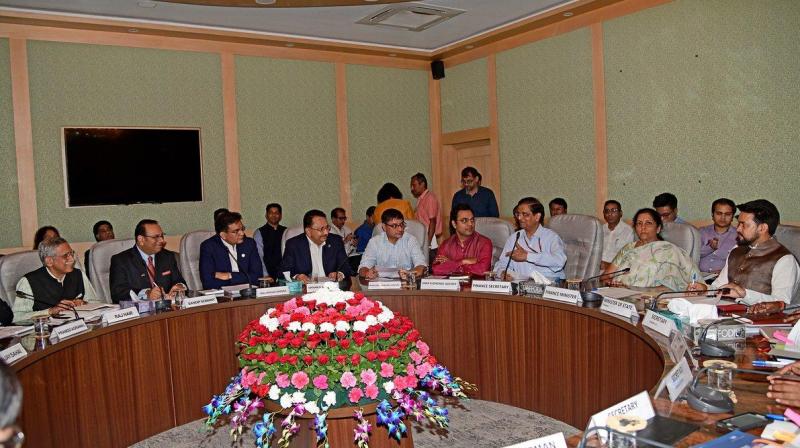 New Delhi: Union Finance Minister Nirmala Sitharaman, on Tuesday, began her pre-Budget consultations with different stakeholders starting with those from agriculture and rural development sectors in which she stressed the need for ways to eradicate unemployment and poverty.

In her opening remarks, Sitharaman focused on possible measures to boost the economic and social infrastructure of the rural sector and ways to eradicate unemployment and poverty through the development of agriculture and allied sectors as well as non-farm sector, read a statement from the ministry.

Sitharaman said that the concerns of the agriculture sector are high on the priority of the present government and stressed on the representation of the different regions of the country so that their specific needs relating to these sectors can also be considered.

She said that the Finance Ministry will also hold broad-based consultations with different stakeholders from the fisheries sector to bring about a blue revolution by optimally using the country's maritime resources.

Sitharaman also stressed the need for encouraging start-ups which can remove the segmentation in the agriculture market and help in providing remunerative markets for agriculture products and supplying it to the final consumers at reasonable prices.

The meeting was attended by among others Anurag Thakur, Minister of State for Finance and Corporate Affairs, department secretaries and other senior officials.

During the meeting, representatives of agricultural and rural development sectors submitted various suggestions to boost investment in the agricultural sector and enhance market access to farmers.

Suggestions were given to improve food processing sector and introduction of technology-intensive processes in the non-farm sector, the statement from the ministry said.

It was also suggested that solar energy may be treated as the third crop to augment the income of farmers.

Incentivising and popularising usage of organic manure for improving the carbon content in the soil, resolving GST issues related to the Farmers Producers Organisations (FPO), an incentive for agro-processing units in the border districts and enhancing investments in research and development (R&D) in agriculture centre.

Besides this, other suggestions that were made in the meeting included filling up of vacancies in agricultural universities, increasing investment in micro-irrigation and solar pumps, financial incentives to the states for implementing agricultural market reforms, promotion of handlooms and handicrafts in the North Eastern states for employment generation and enhancing rural income, creating of aggregators for farm equipment and promotion of non-IT related rural start-ups.

Representatives of different agriculture and rural development sector were also present in the meeting.