Kashif Jameel (34) was rushed to a private nursing home where his condition was stated to be stable, the police said. 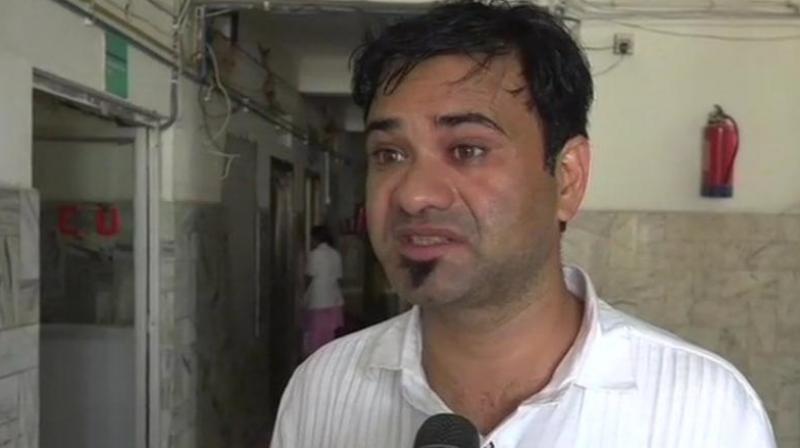 Dr Kafeel Khan said, 'A case has not been registered yet as police are waiting for his health to improve so he can tell what actually happened.' (Photo: Twitter/ANI)

Gorakhpur: The brother of Dr Kafeel Khan, an accused in the Uttar Pradesh's Gorakhpur BRD Medical College case involving the death of 63 children, was shot at allegedly by some unidentified bike-borne miscreants Sunday night.

Kashif Jameel (34) was rushed to a private nursing home where his condition was stated to be stable, the police said.

He told the media that the bullets have been removed from his brother's body, and "the operation has been successful. He is currently in ICU (Intensive Care Unit). Three bullets were shot at him in order to kill him. Who has fired, we do not know. But it was 500 meters from Gorakhnath Temple, where the Uttar Pradesh Chief Minister was staying."

According to reports, Dr Kafeel Khan's brother was shuttled from a private hospital to two government-run facilities, and back to a private hospital. The surgery reportedly took place around 2 am, three hours after the firing.

“Around 11 pm, in the Humayunpur north area near the JP hospital, some bike-borne miscreants shot at Kashif Jameel. He sustained injuries on his right upper arm, neck and chin," Kotwali police station Inspector Ghanshyam Tiwari said.

"He is undergoing treatment at a private hospital where his condition is stated to be stable. No complaint has been given so far," the officer said.

Hours after the shooting, Gujarat lawmaker Jignesh Mevani targeted the Uttar Pradesh's BJP government. Mevani tweeted "Dr Kafeel saved children when Yogi Adityanath government had no money to pay for oxygen. He was put behind bars. Now his brother is shot at. Thank you so much Modi ji for what your 'acche din' are offering us - hate speeches, violence, bloodshed and bullets."

After eight months in jail, Dr Kafeel Khan was released on bail by the Allahabad High Court on April 25. The court said there was no direct evidence of negligence on his part.

63 children, mostly infants, had died at BRD hospital in Gorakhpur within a week in August, 2017. There were allegations that the deaths occurred due to disruption in oxygen supply. The BJP-led Uttar Pradesh government, however, had denied that shortage of oxygen led to the deaths.

Dr Kafeel Khan was in-charge of the pediatrics wing and had arranged oxygen cylinders from a private hospital. But he was removed and arrested on charges of negligence.